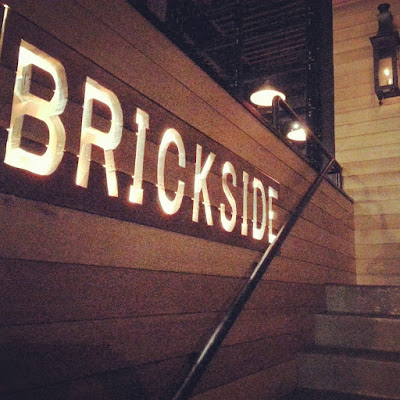 Brickside Food & Drink has a new chef, an updated menu, and a new in-house smoker. Bacon and smoke fanatics will want to check out the results. Chef Matthew Smith has learned from many of the best in Las Vegas and Italy. Alongside the upscale sports bar fare longtime patrons expect, he enjoys serving unusual dishes that can take days to prepare from start to finish.

There is still a giant 13' projection television screen over the open kitchen showing the big game. 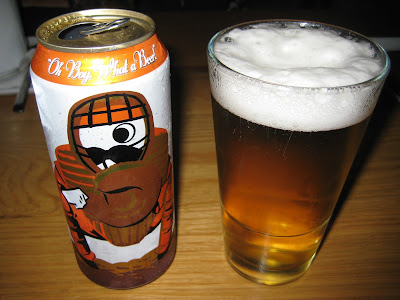 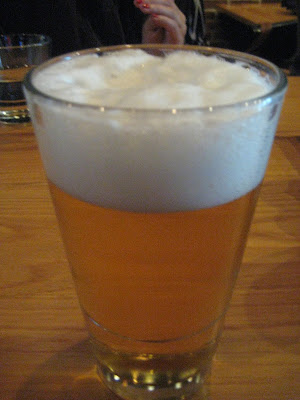 And I was still able to start off the evening with one of my personal favorites, National Bohemian, which isn't available on as many Montgomery County beer lists as it should be. The list here is strong on Jailbreak and Flying Dog - and a few by Salisbury's Evolution, Cambridge's R.A.R., Baltimore's Heavy Seas and Union, and D.C. Brau - on the local craft beer end of the spectrum. 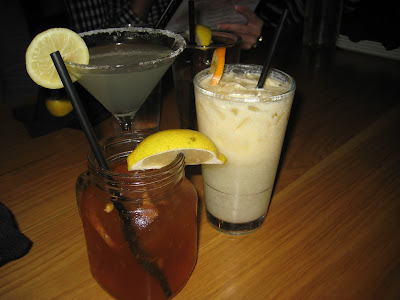 In keeping with the Prohibition theme of the restaurant and bar's interior, there is also a wide selection of cocktails, including the popular Creamsicle Crush. Another drink that was a hit at my table was the Cranberry Crush. 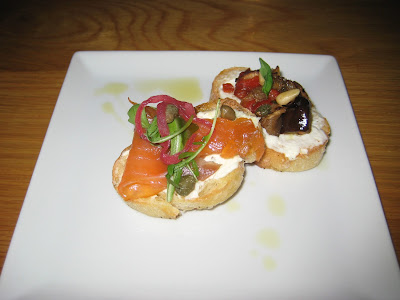 Among the new items being made in-house is smoked salmon, seen here on a crostini, along with Wild Mushroom and Brie (back). 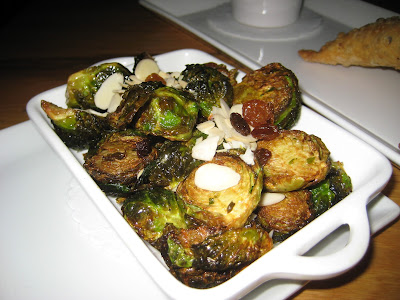 If you're having trouble getting your kids to eat vegetables, you might want to try Smith's Fried Brussels Sprouts, crispy with great flavor and garnished with golden raisins and toasted almonds. 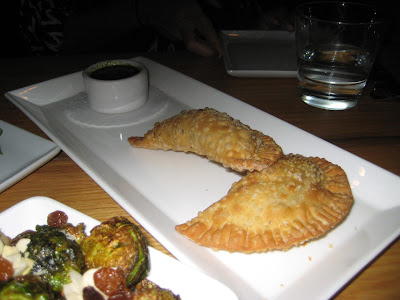 Beef empanadas here have a secret ingredient - chorizo sausage - and come with a chimichurri sauce for dipping. The filling is really salty and really good. 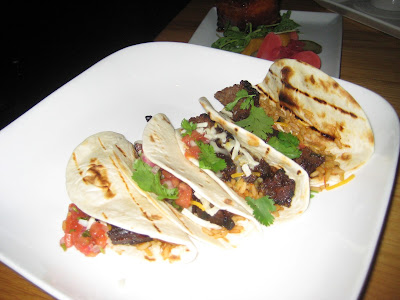 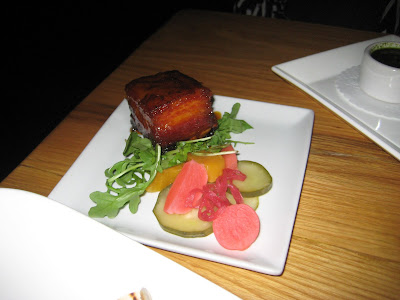 A new entry onto the list of "dishes one has to try in Bethesda," and one that reflects days of work to create, is the Pig and Pickles. A brick of housemade bacon is paired with housemade pickles. The bacon is simply outstanding. 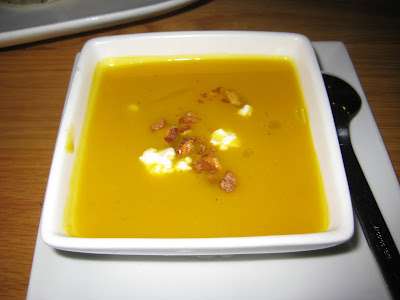 Butternut squash soup is garnished with goat cheese and more crumbled pork gifts from the in-house smoker, but the soup stood well by itself. 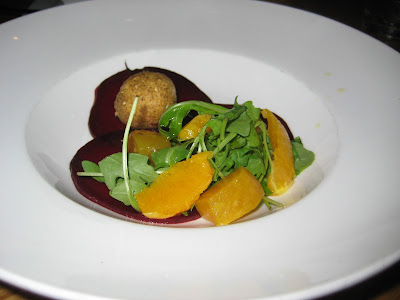 This may look like a meatball salad, but it is actually a roasted beet carpaccio. The "meatball" is a ball of goat cheese coated with spices, along with wild arugula and oranges. 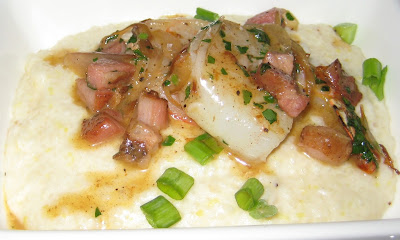 I'm a shrimp and grits connoisseur, and these passed the test. The grits by themselves are fantastic, and the tasso ham and shrimp butter are of course made in-house. Finally, the shrimp was not rubbery and tough. A winner. 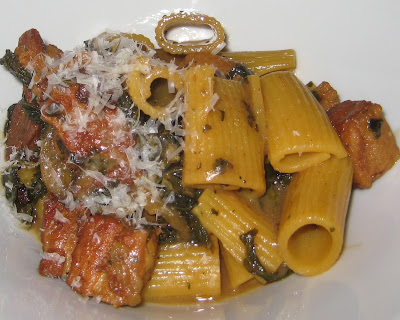 For hearty appetites, there is the Pork Belly and Kale Pasta, with rigatoni and Parmesan cheese. This is extremely rich with a smoky and meaty sauce. Each ingredient, including the arugula, was delicious on its own. Probably not for low-sodium diets, but the perfect dish to try on these increasingly cool fall nights. 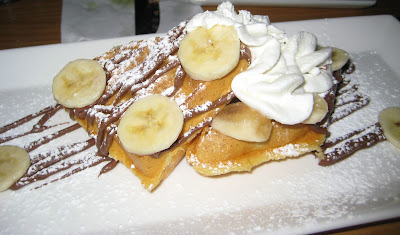 To finish the meal, there is a very rich Nutella waffle. And the waffle has a buttery egg flavor that is as rich as the Nutella. Sliced banana, powdered sugar and whipped cream top off the dessert. The real surprise here is the housemade ice cream. An apricot gelato tasted like something you would get at a shop specializing in just that, like Dolcezza. 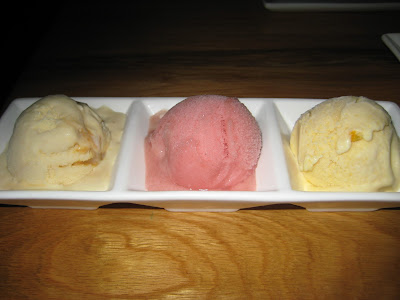 It's an excellent example of the bar being raised at this bar by the arrival of Smith, an Ellicott City native. Pork and chicken from the smoker elevate salads and flatbreads, in addition to the standard BBQ fare. You're as likely to find the Trump-Clinton debate on the big screen as you are a football game here, but you will dine well in either case. Four stars.

How much did they pay you for this nonsense?

Bacon and pork belly and a smoker. My kind of place.
Pork belly, it's not just for bacon.

Did you drink all of those drinks? Did you have to call mommy to come give you a ride home?

Wow that was a lot to order in one sitting! I'll go give their new menu a try. The empanadas sound great! Although the "secret" ingredient doesn't seem so secret. :)

Great report and review! I'm going to check out the new menu.

"Everything gets five stars!" says Dyer yet again.

"I'm a shrimp and grits connoisseur"

LOL, sure you are.

The shrimp "was" not rubbery? Use proper grammar, you birdbrained dipstick

Easy with that red pen, @ 10:23 AM. Maybe he was just talking about one shrimp out of the 15 that were served to him. Maybe he didn't want to mention that the other 14 were rubbery.

I nominate Maloney Concrete @ 9:31 AM and Skippy @ 9:32 AM for Most Obvious Sockpuppets Ever.

That's a lot of food for one sitting! How much was the bill? I'm curious the Brickside pricing. How is it?

Looks yummy! What was the check cost? Is Brickside pricey?

@136 LOL YEA RIGHT! Birdbrain could never afford this place unless he was comped the food.

The same anonymous nut at 1:52pm & 1:47pm,etc. watches Anthony Bourdain and shouts at the TV, calling Bourdain a freeloader, an alcoholic and demands Bourdain's tax returns. That is until his mother releases his restraints for his sponge bath. he quietly curses Robert Dyer as the restraints are loosened.

"Elm" is confusing Bourdain and Birdbrain. I guess the words sound similar.

"Anonymous" negative guy is up to his old game of trying to disrupt Dyer's site. Same negative weird comments, particularly on Dyer's excellent coverage of Bethesda restaurants. His jealousy of Dyer has clearly gone to his head.

Elm fantasizes that Dyer is Bob Woodward and Anthony Boirdain together.

Elm suffers from Megalomania by Proxy.

Compared to the interns and Frederick based freelancers in the local legacy media, Dyer absolutely is Woodward & Bourdain.

4:21 PM - You are very generously assuming that Elm et al are not Dyer himself.

Anonymous said...
This comment has been removed by a blog administrator.
6:37 PM

Hi I love this website
I wanted to comment on the criminal section
Is anyone notice an exorbitant number of car thefts? Actually more and more crime in Bethesda?
One police officer said coming from monthpgomery village Prince George's