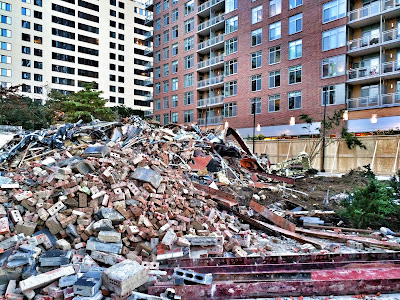 Demolition has begun in a big way at the future site of Donohoe's second tower in its Woodmont Central development. A mixed-use residential building, it will be 17 stories tall with retail and restaurants on the ground level.

Yesterday, the promised wooden wall was in place to cordon off the demolition zone from the pedestrian plaza outside of the existing Donohoe tower, the Gallery Bethesda luxury apartments. There is already a large pile of demolition debris where the building that had a mural facing the plaza was.

There's another of the required sidewalk closure signs, this one stating that the sidewalk will reopen on March 21, 2018. At that point, another major addition to the Bethesda skyline will be standing where this debris is today. Still to come down is the familiar, rounded Miller and Long building at the tip of the triangle at Rugby and Del Ray Avenues. 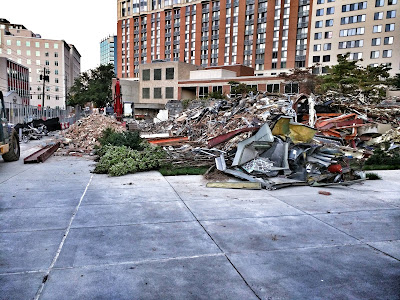 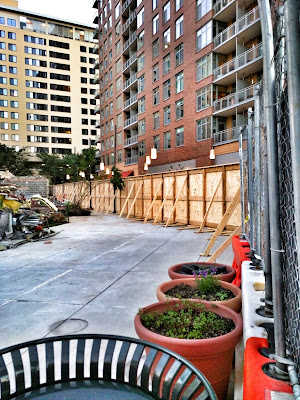 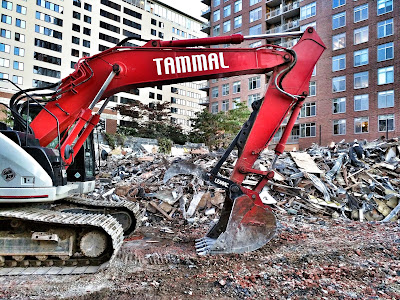 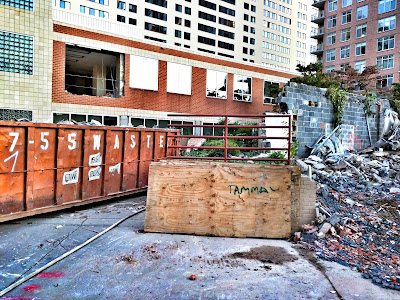 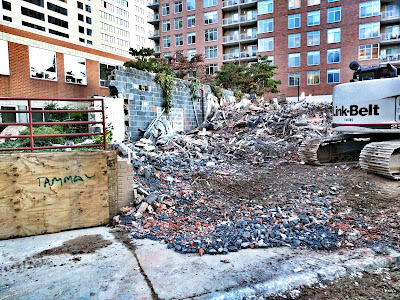 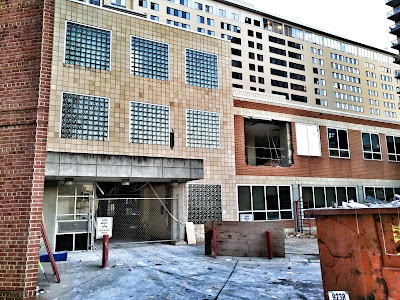 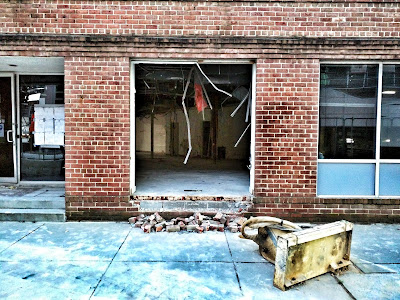 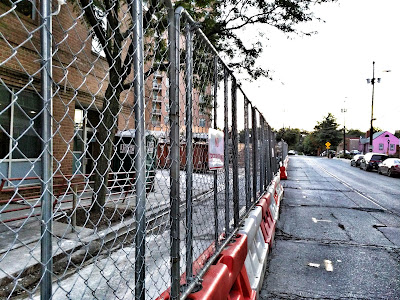 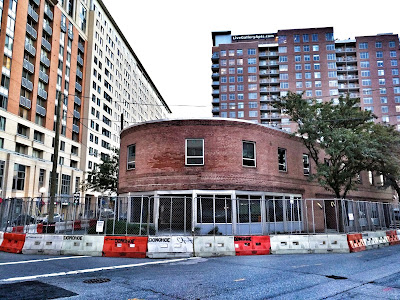 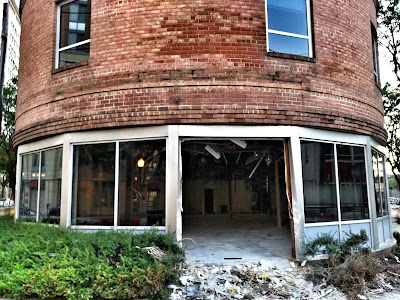 Thanks for the update and pictures.
#AvoidRugbyAve

Should have just thrown yourself in the debris, Dyer. And your blog too while you're at it, birdbrain!

Anonymous said...
This comment has been removed by a blog administrator.
6:54 AM

Our once great county in shambles. Buildings falling to the ground. Term limits. Dyer 2020.

@ 6:54 - Wow, that explains a lot. Thankfully he's still only at the Failed-Artist-In-Vienna stage of his life.

Tallman's article was much more informative. Worth the 93 minute wait.

7:34: You like your news reheated in the microwave later in the day? Most prefer it fresh and are getting it here. The reporter you reference wrote that Landy Lane was in Somerset - Oops. Not "informative."

7:34 AM Presumably you're the freelancer if you're timing when your post went up.
You rehashed what Dyer reported a few weeks back and regurgitated his photos from today.

Envious of your cold reheated leftovers..lol.
Rehash of what Dyer reported weeks ago and you want a gold star.

@ 9:00 - I read the article on Bethesda News and it had one photo that didn't resemble any of those in Dyer's Photorrhea Gallery in the slightest.

We need the new housing!

Good to see activity on the northern tip of town.
Back in the day, it used to be a residential neighborhood of houses.

Actually the Miller & Long building only goes back to the early 1990s. The other two office buildings are older.

12:01PM Huh?
There's no reason to be nasty to me. I worked there. I also worked at 4833 Rugby. I parked in gravel lots that are now a highrise and an in-progress police station. I worked retail on weekends on Woodmont Ave during that time too.

Yep, the Palisades high rise apartments used to be a gravel lot, back in the day.

I think that 11:18 is thinking of the middle building, with the glass block, rather than the one at the corner.

10:53: And written by a reporter who wrote that Landy Lane was in Somerset. Maybe he should take the County Council bus tour of Westbard to get familiar with the area. Fortunately, Bethesda can turn to a lifelong resident like me for the real news.

Tallman...award winning, long time writer. And he gets the plum assignment to cover a pile of rocks..lol.

Pulled the short straw I guess.

Was it a "plum assignment" for Dyer, Mr Wee-Hour Shill?

You're wasting Tallman, sending him to a pile of bricks. Send the intern from Bumfuck U next time.
Hope you at least got Tallman a lollipop from the new candy store.