Another shop targeting men is coming to Bethesda Row. Read Wall is opening in the former Kit + Ace space on Bethesda Avenue, but is promising an atmosphere more like a "clubhouse" than a store. They are also promising to have bourbon on-tap and beers on-ice when you arrive. 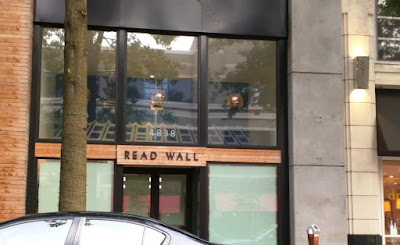 Read Wall is a local company named after its founder, who grew up in Spring Valley, D.C. Wall is laying claim to "American tailoring" in his suit design, which is described as a more-natural shoulder, a higher armhole, a nipped waist, a slightly-tailored leg, and "never skinny." Read Wall suits are made with cloth from Italy, Scotland and England's "best mills," and their suits and shirts can be custom made in American factories.

There is an existing Read Wall bricks-and-mortar store in the District, in Shaw.
Posted by Robert Dyer at 5:06 AM

Do they make your suits? Do you like the slightly tailored leg? Or do you prefer the skinnier Italian leg?

What does it mean, using boom like that? (I'm really asking, no snark)

I think it was one of those underground explosion tests over at the NIH hamster tunnel project...

Or perhaps another sign of our moribund economy...you know, business men buying business clothing at a nice store. Sure glad I picked up my $85 black tee shirt before Kit and Ace took its big dirt nap.