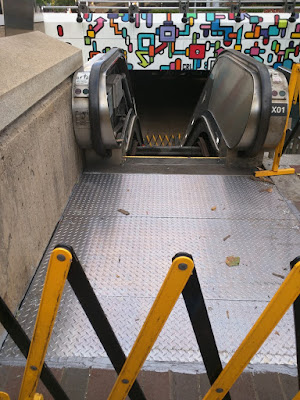 WMATA promised the extremely-behind-schedule repair of the plaza-to-bus bays escalator at the Bethesda Metro station would be completed this week, and that it would be back in service yesterday. Wrong. The escalator was out of service Friday.

Metro has been blasted by riders now that the final results are in for the "surge" and "Safe Track" efforts, and they have been an utter failure. They didn't even fix the water leaks at Bethesda, and are going to start another Safe Track-style extended station closure scheme this month to "try" to fix it. In fact, the end of Safe Track brought a complete meltdown on the Red Line this week. As I told you all along, Safe Track was nothing more than a way for Metro to save money by not running trains, while "looking busy." This from the transit agency that can't even get automatic train control operational with eight years to fix it. Eight years!
Forgive me for having a few chuckles while listening to our inept Montgomery County Council give equally inept Metro boss Paul Wiedefeld a "Heckuva job, Brownie!" warm welcome in Rockville this week. Perhaps in their shared incompetence, they find P.W. a kindred spirit of sorts. It's a match, folks. 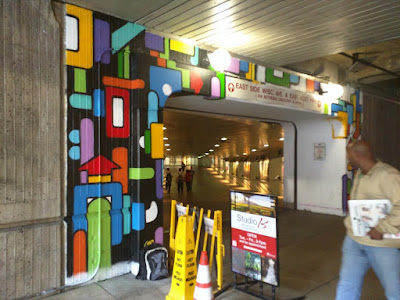 There's also some new art in the Bethesda Metro station, and I have to say, I don't like it. I tried to contain myself when the first mural was done around the upper rim of the bus bays. But it basically looks like someone vandalized the station. It would be fine in a different context on its own, but it just doesn't fit with the Metro architecture. When you think of the great artistic triumphs of Greece and the Roman Empire, and then consider public art in downtown Bethesda...Good God, what's happened to
us? We need someone to Make Public Art Great Again! 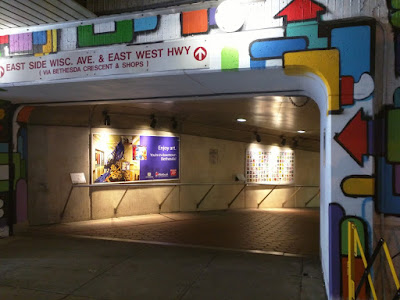 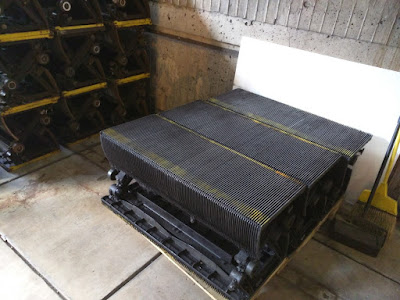 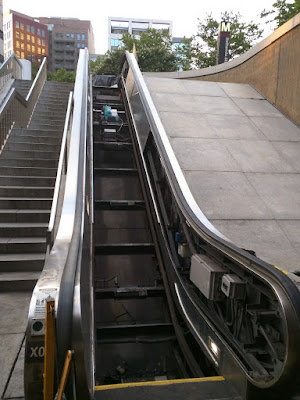 "Surge" and "SafeTrack" have nothing to do with escalator repairs or the water sealing along the western Red Line tunnel, Birdbrain.

Is this the molehill you want to die on, Dyer?

funny that you say we need someone to Make Public Art Great Again when your boy Trump is cutting public arts funding.

10:00: They were presented to the public that way, and the albatross is now around their necks. They were supposed to address all chronic repair problems throughout the system. Wake up.

10:09: Trump hasn't cut a dime of anything yet. The laughable Republicans in Congress will probably restore most spending in the budget. Obama played Paul Ryan like a violin. He got him to pass his budget without even exerting himself.

"They were presented to the public that way"

No, they weren't. Please stop lying.

"They were presented to the public that way"

People are asking if it's a more than just a coincidence that "Dyer" rhymes with "liar."

10:21: Yes, they were. Please stop lying. You and the Council - and a few developer-beholden "journalists" - are the only people defending Metro.

To be followed by, "you just love Barwood and Comcast! And all you do is ban stuff!"

It was called "SafeTrack," not "SafeEscalator" nor "WaterTightTunnel." I challenge you to present even one official statement from WMATA in which they state that escalator repairs would be included as part of the SafeTrack program (not merely scheduled concurrently).

11:22: As I've told you, they sold it that way. Escalators and arcing insulators (one result of water leakage) are at the top of the list of major problems. Of course they were supposed to be part of any maintenance efforts like the surge and SafeTrack. In reality, it was just a sham to save money by not running trains. Shameful.

You didn't answer 11:22's question. Answer it head on without parsing words or simply say, "you're right." No harm admitting when you're wrong. We are all wrong on occasion. Don't dance around the question and try to use words to avoid the question. Answer directly or just fall on your sword (which to anyone else just means they're human but to you means a whole different thing.

You're an idiot, Dyer. But I belabor the point.

@11:28: As I've told you, they did not sell it that way. Arcing insulators (one result of water leakage) are indeed at the top of the list of major problems, but escalators are merely a nuisance. Meanwhile they've been working with engineers and geological experts to develop a solution for the leaky tunnel. They could've started last year but at that time the GM determined that the proposed fix may not be reliable and was subject to quickly-escalating costs. The proposed pilot uses state-of-the-art technology and a process that will be much less disruptive and more cost-effective. Or is it the position of this blog that Metro should waste money?

With this statement the author belies a fundamental misunderstanding of the very project he criticizes. SafeTrack was a program broken up into 16 distinct "maintenance surges."

In reality, it was just a sham to save money by not running trains.

I wonder if all the people WMATA got to stop using Metro will ever come back?

1:14: Yes, I do have evidence - a complete meltdown of the Red Line this week proved no significant improvements were made. The cost of operating all lines normally exceeds the expenditures made during SafeTrack - shutting down trains and not paying employees saved mucho dinero.

It's funny that BB reported in detail on Metro's meltdowns his week, whereas Dyer reported only on that short escalator that nobody uses.

Only a mere mortal would question Dyer. Is questioning Dyer grounds for a 5 finger death punch while he dons brass knuckles?

The escalator replacement program has been going on for nearly a decade and will continue for several more years. As 1:14 notes, these repairs do not have the same safety implications as the track repairs, so they have a much lower priority. The escalator repair program completely separate from the SafeTrack program, which began last year and concluded a few weeks ago.

2:09: With TV, radio, Washington Post heavily covering the meltdown, trust me, nobody was turning to the small and slightly-failing magazine for their 2nd rate coverage from inside their office. This is one reason they're struggling.

Except they aren't struggling. What would make you say they were? Why do you continually disparage another local business?
Word on the street is that it's you who is struggling. You've bitten off more than you can chew and it shows in your articles. To say nothing of the fact that America is tired of the bullying and insulting, and that goes for Bethesda too. Do your "job" and inform us, or just blog about things you don't like and food reviews. Leave the heavy lifting to real journalists, or at least people who have taken Journalism 101.

The Bethesda Metro station is a dump. I wonder if they build a canopy over this constantly broken escalator if that would help? Surely rain and snow can't be helping the situation.

10:18: "Obama played Paul Ryan like a violin. He got him to pass his budget without even exerting himself."

What are you talking about? FY16 and FY17 were both CRs. Paul Ryan became speaker in October of 2015.

10:42: Most readers are thinking of you as a mental case right now, considering this site is delivering the news from Bethesda on a daily basis. As far as the struggling magazine, they should stop attacking me, stop plagiarizing and stealing my content, and stop trying to get local businesses to blackball me. And you accuse ME of "disparaging another local business!" Your pontification is misplaced.

No "real journalists" steal content and try to pass it off as their own, as the folks at the small and slightly-failing magazine do.

Criticising funding of Planned Parenthood and linking to Breitbart will not endear you to the voters of Montgomery County, Dyer.

8:24: Where did I criticize? I simply responded to claims of budget cuts, when in fact, Paul Ryan has presided over two budgets that could fairly be called Obama-Ryan budgets, and will likely do it again in overturning Trump's proposed cuts.

Q: Why do you continually disparage another local business?

Dyer's A: Most readers are thinking of you as a mental case right now.

Where are they attacking you? Certainly not on their site, not in their comments...
Show a case where they attacked you.

Getting locals to blackball you? Just like The Washington Post has a written policy forbidding anyone from using your name? And the Gazette folded because they couldn't keep up with you?