I promised you a detailed update on the Gallery Bethesda luxury apartments construction site, and here it is. But we're not just looking up from street level in photos this time. Now we're going to go inside in this exclusive video I shot earlier this week.

In Part I, join me as we take the construction elevator to the rooftop, 18 levels above downtown Bethesda. See Bethesda as you've never seen it before - and if you're afraid of heights, from the safety of your desk chair or smartphone.

As you know, I've been giving you regular construction updates on the projects now being built around Bethesda, with the Gallery Bethesda being the one closest to completion.

We've been watching the Gallery since demolition of the old buildings on the site began, from various vantage points. So it's pretty exciting to actually get inside, and see the progress and spectacular rooftop views.

The lower floors are the furthest along, to a greater extent than you can tell from the outside. High-end appliances are already in place in some units, as well as light fixtures, iPod docks, and luxury hotel-style bathrooms. One observation I can make is that there is pretty good sound deadening in the walls and floors of these units. As you would expect at a big construction site, there was a lot of noisy equipment being used. Yet, when touring a more-finished unit on the second floor, it really muffled that noise, which wasn't all that far away, proximity-wise. I thought that was notable, as I've heard many complaints from residents of buildings constructed between the 90s and the mid 00s, who say they find new buildings noisier. So I thought that was pretty impressive.

It's also the first smoke-free building in downtown Bethesda, which means no clothes that smell like the cigarette smoke coming from the apartment next door, etc., etc.

On the roof, as you will see and hear in the video, it is going to be a posh hangout year-round.

In the next chapters of this video update, you'll be able to go into 2 different units and see the views, appliances, fixtures and finishes. We'll also take a look at some of the amenities, as well as scenes from around the construction site, for those of you - like me - who find all of this very interesting.

James A. "Jad" Donohoe, Senior VP of Donohoe Development Company, led the tour. He said that, for the moment, Donohoe is considering calling the future second tower The Rugby, and that it will be marketed on its own merits, not simply as the "Son of Gallery."

Both towers will share a pedestrian plaza a la Bethesda Lane, but with a more modern atmosphere, art and accent lighting.

The Gallery Bethesda is expected to be delivered shortly after the start of 2014.

I hope those of you who are interested in the construction going on around us - or who simply want to see Bethesda from the highest point accessible in town - enjoy Part I.

Stay tuned for the next chapters of this Gallery Bethesda hard hat tour. 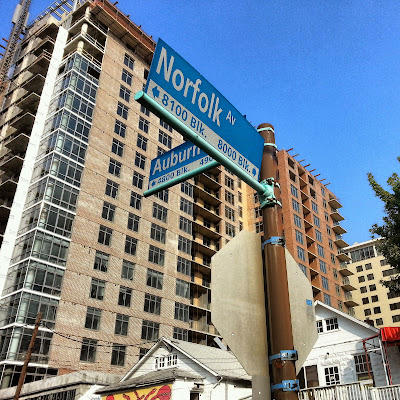