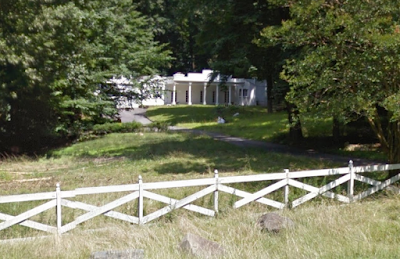 If losing the unique mansion that once belonged to a Hollywood star isn't bad enough, a creek that has foiled redevelopment of the site for years will now potentially be relocated. The Maryland Department of the Environment is hosting a public hearing on May 25, 2016 regarding a tributary of the Minnehaha Branch creek located at 6789 Goldsboro Road. The hearing and informational meeting will be held at Walt Whitman High School's cafeteria, at 7:00 PM.

According to the MDE, the topic will be the relocation and restoration of that tributary, which the U.S. Army Corps of Engineers has previously said cannot have a new structure built within 100 feet of it. A mysterious developer, 6789 Goldsboro, LLC, plans to construct 19 townhomes on the site, which currently is home to the supposed ruins of a mansion where actress Ilona Massey lived until 1974. She was a star of Frankenstein Meets the Wolfman. That mansion will be razed.

Attendees will be able to comment on the impacts of the so-far-unspecified changes on the waterway and 100-year floodplain. It sounds like this is being done to facilitate development and private profit, rather than for an environmental benefit. Along with the stream, a significant stream buffer of green space runs along the rear of the 5.5 acre property.

The changes planned will affect 7921 SF of the stream, and 12007 SF of the 100-year floodplain. If you have a property near this site, you will definitely want to attend, as would watershed advocates. The Minnehaha is a significant feeder into the Potomac River. The stream already has flooding issues along Goldsboro during storms; one driver self-rescued from rising water Monday night south of River Road.

Minnehaha Branch also has a significant historical value. It once ran under the now-gone amphitheater at the Glen Echo Park site and was used to power a pipe organ and speaker system there, when it was a Chautauqua from 1891 until 1900, when it was leased to build an amusement park on the property.

I can't comment on the environmental impacts of the proposed stream changes yet. But the loss of the mansion itself is another failure of historic preservation in Montgomery County. This property has always been an impressive vista making the climb up from MacArthur Boulevard by car or bicycle.
Posted by Robert Dyer at 7:00 AM

Old does not equal historic.

A famous person lived here once, we must never forget this!

I grew up in Bethesda very close to the intersection of Goldsboro and Mass. All I have to say is that area floods very quickly during bad storms. I think redevelopment of that property would be a mistake due to the increase in traffic and potential flood concerns. The crumbling hillside of houses above that creek running parallel on Goldsboro should be fixed before any discussion about redevelopment of the vacant property. I am actually quite surprised an individual didn't snatch up that property to remodel or construct a new home.

Dyer has become so insane that even a creek is laughing at him now.

7:11 I would think the MDE has taken into consideration the environmental impacts relocating this creek will create. This is not something they do just to appear a developer of any property. As for the traffic concerns, you are now showing the NIMBY attitude expressed by your brethren in Westbard. Eventually a property owner desires to express is given right to either pass on land or improve it without the express written or unwritten consent of the NIMBY group. Get over yourself.

@7:31 AM - This is 7:11. I am entitled to my opinion just as you are to yours. Believe me, I am far from a NIMBY. Growing up here I have seen first hand the traffic at the circle that is no less than 500 feet from this site get backed up. I guess the addition of 19 or so townhouses won't add THAT much more traffic. My main concern is the road quality (as every year it deteriorates from flooding) versus building some new homes. Just the other day I was merging from MacArthur onto Goldsboro and I hit some pretty nasty potholes. In regards to Wesbard...the size of the main roads around there can handle that kind of increase in traffic.

8:38AM - No it doesn't. It's a Dakota Sioux word that translates loosely to waterfalls.
Sheesh.

"Ilona Massey...was a star of Frankenstein Meets the Wolfman."


"The changes planned will affect 7921 SF of the stream, and 12007 SF of the 100-year floodplain...The stream already has flooding issues along Goldsboro during storms..."

Perhaps this is because Goldsboro Road was built RIGHT NEXT to the creek? Surely you've noticed this?

Don't forget the 1989 flood at Glen Echo Park. Minnehaha Creek flooded and destroyed over 50 cars carrying many of them into the Potomac. Most of the cars belonged to people attending the dance in the Spanish Ballroom who had no idea their ride home was already down river. It took ages to rebuild the lot and channel the creek in its present form.

@ 12:19 PM - That's odd. You'd figure that the self-proclaimed expert on "the best amusement park in the world" would know about that disaster.

I hear this is breeding ground for endangered black lagoon creatures.

@ 3:31 PM - I commend you on your clever guess, but Robert Dyer was actually born in Virginia.

"This property has always been an impressive vista making the climb up from Mom's basement."

9:27: This is a tributary to the Minnehaha Branch under discussion, and how the changes might impact the overall flooding issues in the watershed area. I'm aware that the main stream is along the road.

That area is now directly under the new flight path out of Reagan National airport.