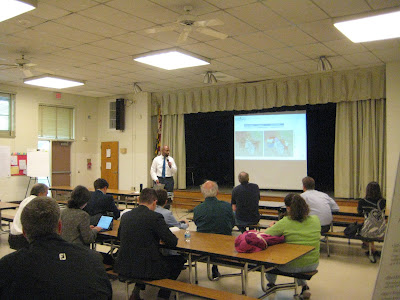 Montgomery County planners discussed the results of their preliminary studies on the impact of future development on schools and roads in the White Flint 2 sector plan area at a public meeting last night at Luxmanor Elementary School in Bethesda. Under several alternatives, school capacity issues will be most critical at the elementary school level. Many more intersections in the plan area would fail or be close to failure, as well, based on their traffic study.

Planners presented several development scenarios ranging from a no-build option to the maximum build-out. Broken down by cluster, development east of the railroad tracks (Randolph Hills) would generate students for the Downcounty Consortium schools. But the vast majority of White Flint 2 students would attend schools in the crowded Walter Johnson cluster.

In terms of the student generation breakdown by school level:

If you are skeptical of MCPS forecasting, and would like to use a different formula to determine a student generation rate, here are the growth numbers proposed:

The maximum build-out of Alternative 2 would allow 5788 new housing units, and 4.87 million SF of non-residential development. 3246 housing units could be built under current zoning; 4841 would be allowed under the "middle ground" option Alternative 1.

10% of housing units are assumed by planners to be townhomes, and 90% to be in multi-family buildings.

What would boost the number of units in the higher density alternatives are zoning shifts such as flipping Executive Boulevard from EOF to CR zone, or moving Federal Plaza from CRT to CR zone, or the JCC property from R-200 to CRT zone.

Planners say they are working with Montgomery County Public Schools and property owners on the possibility of a new elementary school in the White Flint 2 sector. They will seek to retain the industrial land along the railroad tracks, as it alone accounts for 10% of the total industrial land left in the County, planner Nkosi Yearwood said.

The sector will be divided into zones (Executive Boulevard, the north area with Federal Plaza and Pike Center, and Randolph Hills), and subzones (Pike Center and Montrose Crossing, Federal Plaza, Jewish Community Center of Greater Washington). An Executive Boulevard zone, for example, is proposed to have a neighborhood green, and infill development opportunities. Planners will also seek to use development there to link The Monterey apartments with Pike & Rose. A much larger park is hoped for in the Randolph Hills area. And a green pedestrian connection will be sought to link Montrose Parkway with Luxmanor Park.
Traffic studies assumed build-out of Montrose Parkway East, but did not presume Bus Rapid Transit or new roads would be built. Some attendees expressed skepticism about the data on current and future intersection conditions. A resident said an MCDOT study showed more intersections failing than last night's study showed. It was also pointed out that conceptual roads within new urban street grids of White Flint 2 might reduce congestion at intersections which appear to fail under all scenarios on these maps (see below).

When the planner presenting the preliminary traffic study says "traffic is working relatively well" currently, it does not inspire confidence that the County is using accurate traffic counts. One thing he said that supports retaining the proposed grade-separated Montrose Parkway East over Parklawn Drive was, "this area will be very heavily influenced by through traffic." That is the key role the parkway was designed to play in the context of the White Flint plans: Keep through traffic moving through without jamming up the local urban street grid. Another light at Parklawn would sabotage that function.

Here are the traffic charts, which planners acknowledged did not show up well on the almost-monochromatic projector in the room. The full color intersection maps are expected to be posted on the project website later today, and should be much easier to read, from what I saw on the actual laptop screen in the room.

Robert with your deep understanding of zoning and the development process I think you would add a lot of value to someone like Equity One!

8:06 Please, you're confusing knowledge with opinion. With Robert it's all biased opinion.

@ 8:06 AM - because a hastily self-taught amateur is always better than a professional who has actually worked in that field.

The Dyer-obsessed out in force today. Must be the rain.

Robert- do you prefer to go by Robert, Dyer, Bob, Bobby or Tarnation Bob?

"Robert with your deep understanding of zoning and the development process"

Must be your first time here...

850- you must have not seen Dyer's youtube reviews yet