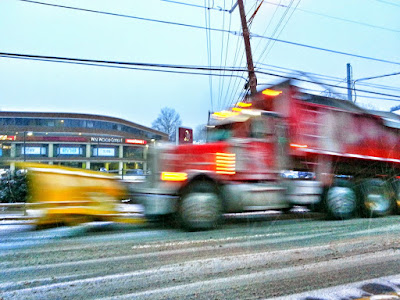 Residents organized by Save Westbard gathered at the Washington Waldorf School in Bethesda last night to discuss next steps in what is becoming a Montgomery County-wide citizen uprising against a planning process dominated by development interests. With the recent passage of the Westbard sector plan, attempts by the County to place several bus depots in residential neighborhoods in Rockville, controversial developments planned in Lyttonsville and downtown Bethesda/Chevy Chase, and the Planning Board approval of an urban-style low-income apartment complex in rural Damascus, disparate citizen groups are linking together to change the process, and boot out the County Council that voted unanimously to approve the Westbard plan and Carver bus depot.

One indication of the frustration with County elected officials was activist and attorney Robin Ficker collecting a bounty of new signatures for his term-limits initiative. Ficker believes he will come in with more than the 10,000 signatures required for term limits to be placed on the ballot for voter approval or rejection. If approved by voters, Councilmembers Roger Berliner, Marc Elrich, Nancy Floreen and George Leventhal would be forced to step down in 2018, and could not run again for those seats for four years.

Two new websites are being launched in the effort at Westbard and countywide.

Evidence recently emerged that the Council has actually been cynically crunching the voter numbers, and had concluded that the number of voters at Westbard alone could not boot them from office. That Machiavellian calculation emboldened them to unanimously pass the Westbard plan, despite overwhelming community opposition and anger. With large, mobilized citizen groups now linking up, all bets are off for their reelection in 2018.

More specific to Westbard (but potentially duplicable in other areas facing sector plan rewrites), is a second site, PlanWestbard.org. Jack Lopez, a resident and professional urban planner, will head up the site. It will not only dive in-depth into the Westbard plans expected to be unveiled next week, but also present alternative concepts going forward.

Lopez says he will try to bring new tech innovations other jurisdictions and the private sector are using in planning to the analysis. Many of the methods currently used by the County to study traffic, for example, are vague, inaccurate, and incomplete.

Longtime County activist Stan Wiggins presented an analysis of the option to incorporate, which a majority of residents voted to explore back in April. It was hoped that an incorporated southwest Bethesda, or Lyttonsville, for example, would give local residents authority over land-use decisions like Rockville and Gaithersburg currently enjoy. Wiggins found that a new municipality's land-use authority would be retained by the County, unless a provision in the law was overridden by the state legislature. Given that many state-level office holders also receive hefty checks from the same developers, that is unlikely to happen.

This is just the beginning, as the large turnout at last night's meeting suggests.

County wide citizen uprising may be a bit of an exaggeration what with the 1 million or so residents compared to however many are opposed to this development scale.

Hooray for Montgomery County snow plows! They had my street cleared within an hour of when the blizzard ended.

"Residents organized by Save Westbard gathered at the Washington Waldorf School in Bethesda last night..."

How many showed up?

5:26: I'd rather get the official count from Save Westbard than try to speculate. The room was full.

5:24: Where are those who favor urbanization? You haven't been able to turn them out in any significant number at any meeting. In fact, there were zero actual residents supporting the Westbard plan at many meetings. So only a nutjob could claim few or zero equals a majority. Opponents have actually been able to generate turnout. Understandable that with no passion for the development on your side that your energy is low. Almost as low as Hans Riemer's. Super low energy.

It's heartening to see Bethesda residents standing up to their Council!

5:24 Snow Plow commenter: Great, but many had to wait nearly a week for a full plow.

Elm: And this is just the beginning!

Even if term limits are enacted, Riemer will not be subject to them in 2018, and Berliner or Leventhal will graduate to County Executive.

5:49: True. Of course, Berliner or Leventhal might get beat by Kathleen Matthews in the primary.

"The room was full"

How big was the room?

Do we have any idea where Matthews stands on stopping this type of irresponsible development?

THE COUNTY ECONOMY IS M O R I B U N D - WAIT NO, STOP TRYING TO DEVELOP MORE!

Even if Riemer isn't subject to term limits, he'd still have to WIN an election?

Although, I'd be sorry to see Elrich go, but he may be fed up with the BS, too.

6:42: Becoming a bedroom community is not economic development.

6:02: Same room where 200+ came to the April meeting, but it wasn't overflowing out the door this time.

Anonymous said...
This comment has been removed by a blog administrator.
8:04 AM

No offense to them, but will Leventhal and Berliner please move on? County Council is not supposed to be a lifetime appointment.
The Council could desperately use fresh ideas.

"County Council is not supposed to be a lifetime appointment."

Nor is residence in Mom's basement.

9:37 AM You disagree that the Council desperately needs new voices and ideas?

I'm not 9:37, and I agree the council does need new voices and ideas. I just wouldn't trade current members for the likes of Dyer.

So vote in your preferred candidate?

In a record setting snowstorm where all resources were out in full force and $30m was spent, it wasn't to bad all things considered.

9:55am Having someone on the Council who actually lives in Bethesda (like Dyer) would be great. Our voices aren't being heard.

^too* bad, you moron

957 must have been Dyer because he has a BIRD BRAIN

There were about 150 people there. I had 200 copies of the agenda and came home with only 30, but I believe a few people took extras to share with friends.

Hi Westbard Concerned Citizens, I support the opposition of such a large scale Westbard development, but 150 is hardly what Dyer calls a "Montgomery County-wide citizen uprising..."

The Council encompasses a whole lot more area and people than small Betheada, though. And compared to many other areas we have it pretty good.

Do property taxes and spending not count for anything at all?

Well, it was a Tues evening; so that likely depressed the overall turnout (last time it was on a Sun but the space wasn't available then). Still, even though we are just one part of MoCo, many community groups are carefully watching our progress and requesting assistance and advice. So, you may not see the uprising at one Tues evening meeting, but I believe it is clearly catching-on in the county as residents see and experience the reality of what the council's decision do to their everyday life. We shall see who's correct come 2018, I suppose.

Not what I said by any means. Re-read where I say only that those opposed to Westbard vs the entirety of the county council population is not quite a "county wide citizen uprising".

Considering the "uprising" includes citizens from Chevy Chase to Damascus to Silver Spring it literally is county-wide. Just sayin.

If you follow Dyer's points though, people who don't show up don't seem to count. He doesn't acknowledge any supporters at all, it's only fair not to acknowledge opposition that doesn't appear either. Not my choice of logic but his own admission.

Would that not also fall into a "silent majority" that Dyer denies existing by his own logic?

A silent majority of MoCo residents didn't vote for Leventhal. Can we ask him to step down.

Wrol, that's your logic right there.

Damascus hasn't been "rural" some time now, and a single apartment building does not equal "urban".

Wrol, a silent majority didn't vote for Leventhal. Under your reasoning, he doesn't represent the county.

Honestly, I don't understand how a vulgarian like Leventhal continues to be elected. He doesn't have much support, other than vocal friends who have a platform to promote him.

The presenters described a Westbard-sector study done in 2008 by an urban institute group at Catholic University. The CCCFH group sent out over four thousand surveys, to homes in adjacent neighborhoods, and got back some fifteen hundred, that showed over
ninety percent of respondents opposed to high-density development. The CUA redevelopment plan was premised on 181 more residential units along Westbard Ave., well
below the bounds set in the 1982 sector plan (580 more units across the entire sector, not just Westbard Ave.). Folks can differ, and quibble, over the geographic reach of unhappiness with the council, or turnout at meetings, but the sentiments of affected residents are well established. The more interesting question is what they will do about their disaffection, and with what consequences.

Disgusted with planners and politicians said...

We'll need pitchforks and torches for future meetings if any Council or developer people show up!! Great meeting. Nice to meet you there, Robert. Also: Consider changing the snowplow photo (which above commenters have made a distraction) and use a more dire image of what this real estate monstrosity will inflict on our community.

You mean common sense told them that the ~500 activist NIMBY's with age and racial prejudice make up only 0.01% of the county.

People like Ficker and Dyer have been trying to push their nutty policies for years and the result: the residents of the county have repeatedly voted for progressive, pro-economic development local politicians.

If so many people agree with Dyer, why does he repeatedly get routed in council elections.

1:12: No, the racially-prejudiced Council ran the numbers. Their lackey rushed out of the room and posted them in the comments section on here.

"Nutty ideas" like a cap on property taxes that forced every councilmember to vote and become the "deciding vote" on excessive taxation? That's actually a brilliant policy, which is going to help term limits pass.

I get routed in Council elections because the MoCo cartel controls the local media and all of the organizations and newspapers that hand out endorsements.And the incumbents have a media empire that doesn't allow challengers to have any airtime, much less equal time.

4:20 (brah) You gotta get over your paranoia that there's one person, paid by both the County and your "competition" trolling you, it's totally absurd......or don't it's funny to watch you go off the rails like this

"the racially-prejudiced Council ran the numbers"

Is Ike Leggett in on this conspiracy, too?

4:39: A guy who spends his days and nights posting childish troll comments, says he stalks and runs background checks on me, and makes threatening statements is claiming somebody else is "going off the rails"? You're in straitjacket city, "brah".

Dyer clearly has mental issues and needs help. His paranoia and delusions are getting worse and worse. I sincerely hope his family and friends are looking out for him and can get him the treatment he needs.

Ever notice had anonymous 7:03 AM projects his problems (mental, financial, personal) onto Robert Dyer?
7:03 AM is like a man child.

My mental, financial, and personal state is quite fine thanks. You're lover Dyer? Not so much.

10:31 AM/10:32 AM I'll add these posts to the building evidence of your mental decline.
It's amazing how you continue to validate my assessment of you. You're just like a child... with issues.

FWIW, Robin Ficker is not part of Save Westbard, although Save Westbard did indeed permit him to circulate his petition to get term limits on the 2016 ballot. The intent was to give residents the opportunity to support this approach if they wished. Save Westbard did *not* ask attendees to sign the petition.

Save Westbard is nonpartisan, and includes Democrats, Republicans and Independents.