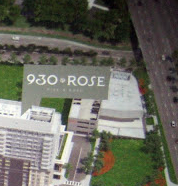 Here's some big retail news from Pike & Rose - the new Federal Realty development will have its own Porsche dealership. Porsche of Rockville will eventually move from its current location it shares with Rockville Audi at 1125 Rockville Pike to a new facility in the northeast corner of Pike & Rose, where the Pike crosses Montrose Parkway.

Unlike the traditional dealerships that have been a fixture along the Pike for decades, Porsche will store all of its inventory and service vehicles within its building, rather than on surface lots. Expect the showroom facilities to be more ample than the urban Ourisman VW/Volvo on Arlington Road, the most recent Bethesda example of an auto dealership leasing in a new urbanist development.

The Porsche dealership is part of Phase 2 at Pike and Rose, the first buildings of which will likely be completed in 2017, with others to follow in 2018. There is no announced moving date for Porsche at this time.
Posted by Robert Dyer at 5:00 AM

This is fantastic news! We believe every garage should have a small, sensible German car in it. This, of course, excludes vulgar brands like BMW, Audi and Mercedes. My husband will be very glad to hear that he can have his 911 serviced while we enjoy a lovely lunch at Pippa Middleton's favorite Italian cucina.

Imagine when all those auto-related businesses in Westbard become self-contained like this one, and all that ugly asphalt is gone.

The new, progressive, thoughtful and high end Westwood development will be a thing of wonder.

Wasn't there a Porsche dealer there back years ago? I think the name of the franchise was Manhattan (not kidding, Poppy) and they also sold Jaguar.

@7:18 Land Rover and Jaguar. All of our Land Rovers came from there. Not sure if they ever sold Porsche as my husband got his from further up the pike.

Still sad about the Saab dealership on that road. They made a perfect first car for high school kids.

Poppy!What a self-centered snobby BITCH! Go back to VA.

Poppy is a fake persona. Trying satire here. Should stay on their own blog, where people know it's mockery.
Poppy needs a disclaimer.

7:50am needs to chill. It's better than nutty comments about the county council out to get Dyer and the trolls etc.

8:25am I think it's pretty obvious that it's satire. Porsche as "a small, sensible German car" Really?