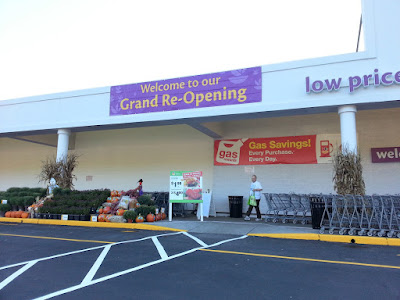 Developer Equity One has announced it has reached an agreement with Giant to have the grocer anchor its redeveloped Westwood Shopping Center. The center on Westbard Avenue has been anchored by a Giant grocery store since 1959. Expected to be in the 60000 SF range, the new Giant store will for the first time have a full-service pharmacy, great news in case Rite Aid does not return in the new center.

Other additions to the new store will include a larger organic produce selection in a "market-style" produce department, a greater range of natural and organic foods, an expanded selection of ethnic and international foods, a large deli serving hot food, and 200 gourmet cheeses displayed on a "cheese island." In the bakery, Giant will add a muffin cart, bagel bin and bread bar.

Separately from the official Equity One announcement, a source told me that in its negotiations to return, Giant sought to avoid any closure of the current Westwood store prior to the new store being ready for occupancy. Whether they got that assurance is only known to Ahold and Equity One as of this writing.

Based on previous renderings, the new grocery store structure will be on the empty portion of the parking lot over near Westland Middle School. We'll have to wait for official word from Equity One on the staging schedule, however.

I think this particular announcement is a win for Equity One and the community. The current store is the best Giant in Bethesda. Only Wegmans would have been a step up; certain other chains could have been a step down. The new urban Wegmans design requires about 10000 more SF than Equity One had set aside for the grocery store footprint. And this being the most profitable Giant store in their chain, it's not surprising that Ahold would be interested in staying on in the new development.

The existing Giant lease expires in 2019; Equity One says the new agreement amends that 1959 lease.
Posted by Robert Dyer at 5:00 AM

Extremely disappointing. Westwood needs to set the tone with a progressive grocer like Balducci's. At the bar minimum it should be a Wholefoods, not a Giant. I wouldn't let my domestic eat the produce from there!

Poppy is a satirical fictional character.

Dyer has sold out to the MoCo Machine!

Hopefully it can be an experimental urban Giant. It does not need all those "common" ingredients. Instead it can focus on providing hot bar, deli, upscale snacks and frozen foods. Great for the busy urban professional. Obviously you can have the faux-Whole Foods facade of organic vegetables when you first walk in so you can be seen perusing the organic broccolini when you bump into a neighbor.

Great reporting Robert! This looks to be the first thing Equity One has done right. Keeping Giant and there loyal customer base since 1959 is an ideal scenario for everyone. The addition of a pharmacy makes alot of sense too for a one-stop shop. Add a beer and wine aile and we'll really, finally be progressing into the 21st century!

I predict Rite-Aid will move out in the remodel. The current Rite-Aid is run down, has narrow aisles, and overall has the unkempt look of... most of the small businesses in the same center.

Probably CVS will end up there instead. Seems like a good center for it.

From the Equity One email -

An expanded international and ethnic food section including a variety of Kosher, Hispanic, Italian, Irish and Asian products

Thank goodness we can now get Irish food.

1:26: I'd like more French, German, Eastern European and Russian products than they have currently, as well. Zero or nearly zero of the latter two currently, and way too few of the first.

Not a surprise, as the lease negotiation process had been announced. Certainly appreciate upgrades of the store.

How sad. I was looking forward to a grocer with a much higher standard. I believe that Giant's salad bar is the worst I've ever had. But for very few items, their meat section actually looks scary! This would have been a wonderful opportunity to invite Whole Foods or Dawson's over. I am crestfallen to learn that I will now have to live with the Giant next door to me permanently.

"Crestfallen" what kind of word is that? Giant has been an excellent grocer for the Westbard area for decades. Equity One will be very fortunate that Giant's customer base stays intact. Cars being towed isn't desirable. Can the new residents who are subsidized with other peoples money even afford the new Giant with their higher prices from new construction? Doubt it..

@ 5:03 PM - "the new Giant with their higher prices from new construction"

You're just pathetically grasping at straws.

How many cars were actually towed at that geezer riot? How many customers boycotted? None, and none.

5:46 Poppy should stay away from the bar. All that Chrystall is going to her bleached blonde brain.

And a very good one at that!

Honesty the Westbard residents who fought so hard against this development don't deserve all the nice things that come with it.

Robert who is your source to say this is the most profitable Giant in the chain? I have a hard time believing this.

It's funny how Dyer is so opposed to development, until it gets built and he's there taking pictures saying how cool it looks and how excited he is for the new tenants.

Can't have it both ways man.

Ok, so it's ok in your book to threaten people (even seniors how low can you go) by towing their vehicles? These are the same people you want to come to the new stores and the lame Westwood Wednesday parties on the asphalt. Hey kids, bring your elbow and knee
pads. Giant is a nice store so of course I'll shop there but any other new stores will have to prove their worth or lack thereof. We have quality businesses there now and surface parking which is great!

LOL, like that's some brilliant new idea you just had. Seriously, get out of your bubble.

Don't worry you won't need to call the tow trucks on Westwood Wednesdays cause no one will be there so get used to it.

Answer: You can't so you wasted the truck drivers time and fuel. Nice job birdbrain!