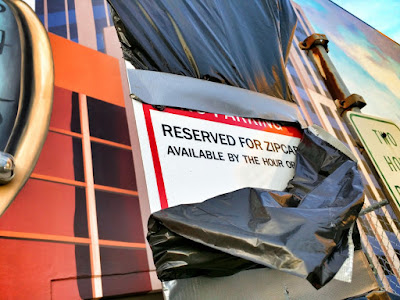 Montgomery County Public Parking Lot 28 is getting two Zipcar spaces. Under the surveillance of King Kong, who roosts atop a building in the New York-via-Las Vegas mural alongside the lot, signage has been installed for the car-sharing service.

Some attempt to temporarily mask the signage has been made, but the telltale logo ornament atop the sign was a dead giveaway, and one of the covers has flapped aside to reveal the sign underneath. 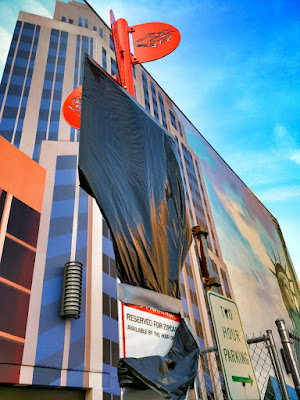 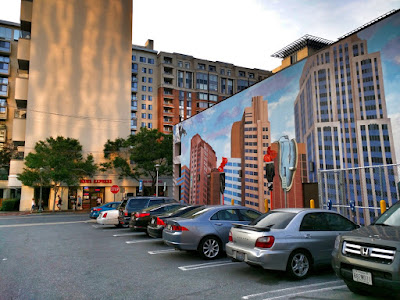 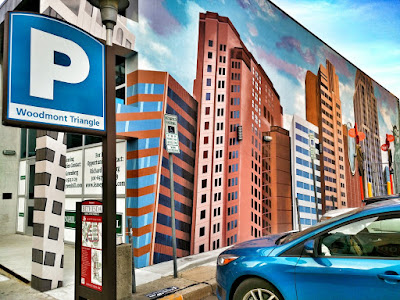 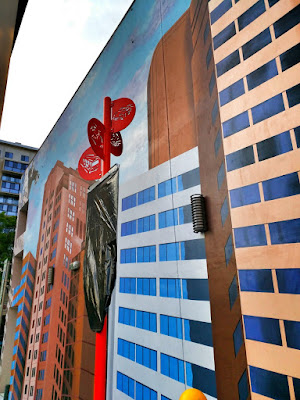 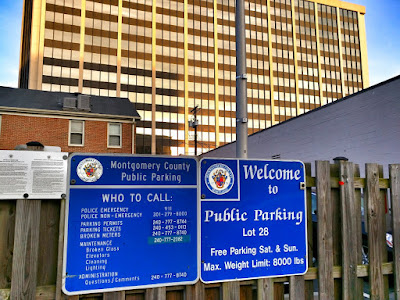 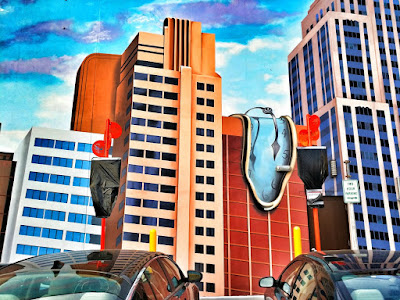 Lots of pictures of the empty building, but no mention that it's empty.

Why is that? If this were 4500 East-West Highway (two years ago), that would have been good for a 800-word Dyerrant about "moribund MoCo economy".

8:08 What are you complaining about this time?
This is about ZipCar, not about a building. Keep up.

8:08: You seem to know as much about economic development as your bosses on the Council. A vacant restaurant space has nothing to do with failing to attract major corporate tenants like Intelsat to a class A office building. Retail and restaurant is not something you build an economy on unless you're a resort town. Welcome to the big leagues, punk.

Anonymous said...
This comment has been removed by a blog administrator.
10:36 AM

10:36 AM The proof is all around us. Robert Dyer is reporting on a new development every day I get up. But, it's all primarily residential. Our county is becoming a bedroom community for folks to live and commute to jobs in DC and Virginia.

We need new leadership and ideas.

All of the photos relate to zipcar and that parking lot. It's great news for those who live in the Woodmont Triangle.

It's a good thing that the Greenhill property is moribund. Otherwise there wouldn't be any parking spaces to spare for the new Zipcar spaces.

Kind of like when I make my biannual trip to Montgomery Mall, I am always grateful for all those empty parking spaces next to Sears.

"Elm" seems to have not considered the possibility that one can do all of one's shopping without ever needing to step inside an enclosed regional moribund mall.

11:12 AM You're putting words in my mouth. I didn't say it wasn't possible. I'm asking where do you shop if you don't go to Westfields? I'm assuming you live in Bethesda.

It's a great mall, by the way. You're missing out if you haven't been in awhile.

"Robert Dyer is the reason I get up in the morning", says "Elm".

The anonymous keyboard cowboys are commenting here today. Self proclaimed experts in all things, but ignoring the facts before them.

How often do you go to the mall??

Well since Dyer brought up Greenhill's terribly designed ugly and random New York mural building, it must be relevant. Whatever happened to the supposed iminent tenant that would explain the NYC skyline?

Anonymous said...
This comment has been removed by a blog administrator.
1:05 PM

"You seem to know as much about economic development as your bosses on the Council."

And you seem to know even less than any of them, just based on what I've read on this blog.

"A vacant restaurant space has nothing to do with failing to attract major corporate tenants like Intelsat to a class A office building."

Do you work for Intelsat? I'm tired of hearing them being used as some feeble justification of your ridiculous "moribund economy" hypothesis.

You brand yourself as a moderate Republican who supports responsible government and economic development yet you:

A/ Criticize the Purple Line and walkable, transit-oriented development in general, yet you seem to love walking around and taking pictures of it. Single-use development, enclosed shopping malls in every town (Lakeforest, White Flint, Frederick Towne, Landover, etc.) are the past. Mixed-use development with walkable street-retail adjacent to office/hospitality/residential uses are the future, along with a handful of high-end or mega regional malls (Tysons, Montgomery, the new Wheaton).

C/ Refuse to acknowledge the hundreds of well-paying jobs being created by small and mid-sized businesses, including right-here in Bethesda

D/ Ignore the county's booming biotech sector, which Gov. Hogan called the "backbone" of the Maryland economy, and is probably the most sought-after industry across the nation

E/ Seem eager to give away millions of tax-payer dollars to attract Fortune 500 companies in other states who very rarely move, and when they do, only employ a very, very small percentage of their workforce at their "headquarters" - C-level execs, their support staff, and some back office. Virginia has literally had to pay to obtain every corporate headquarters it's received over the last decade or so, and for limited benefit. Arlington just abandoned its "no subsidy" policy to keep Opower. It would only make sense for Mont. Co./MD to provide financial incentives to companies like McCormick and Marriott, which employ thousands in the state, have been here for a very long time, and whose move would create an outsized negative economic shock.

Please wake up from whatever fantasy land you're in. The current governor got elected because he didn't make the mistakes above, and for the most part has been successful in a dark blue state. This is because he acknowledged reality, not blind, extremist stupidity,

Hi, I'm 11:02 AM guy from yesterday. I do 90% of my shopping in either downtown Bethesda or Friendship Heights. From time to time, I will go to the Best Buy in Tenley or the Bed Bath & Beyond in Rockville. My only real reason for going to Montgomery Mall anymore is Home Depot (not actually in the mall) or the food court. Oh, and a twice-a-decade trip to Sears Auto (also not in the mall), to replace the battery in my car.

F) Want to add "manufacturing jobs" in the County having the most highly educated, white-collar workforce in the country. Want to build large factories in a county in which the population is extremely concerned about potential threats to the environment.

G) Want to build obsolete freeways, which would require the destruction of hundreds if not thousands of homes, and thousands of acres of parkland, freeways which were deleted from the Master Plan decades ago, in response to widespread public protest.

Hans, is that you?

@ 10:21 AM - Unelected fifth at-large member of the County Council, is that you?

9:21 AM Westfield has a wonderful movie theater and dining. Even if you never stepped into their stores, the food and theater alone are reason to visit frequently.

Wouldn't it be nice to live in a walkable community and not have to drive to a theater, food, and stores?

All of those amenities are within a mile walk from my house. Or, I can hop on the Circulator.

Isn't Westbard a mile or so from the metro?

That Karr/Greenhill mural is so random and a terrible design choice. It makes absolutely no sense on Bethedsa

4:28: No, it is significantly more than a mile from any Metro station. Smart growth is defined as projects within 1/3 to 1/2 of a mile from Metro. Westbard is disqualified, and is an autocentric community like the Palisades and Spring Valley.

4:44: Now that is a legitimate comment or opinion. I don't agree with you, but it's a fair comment and it can stay. All I'm asking is that people don't use the comments to defame, disparage and settle personal beefs with people.

Wouldn't you have a personal beef with Riemer because he beat you in the last election? Does that mean every comment of yours should be censored?

Also all your comments about SH or AK or DR. None of those comments are disparaging or defaming?

What a non-sensical mural on the Greenhill/Karr building. I was talking to the painters and they were confused about why as well.

You were talking to the painters, huh. When was this? Who on the crew did you speak to? Male or female? What was their accent? I'm interested in hearing your replies.

It was a while back but if I recall there was an older gentleman and woman, and a few younger women. No discernible accent. Nice people. Friendly to chat with.

Such an ugly mural on the Karr Greenberg building!

I like it, and it's better looking than a blank wall. A little something interesting and unexpected. It would have been nice to be a more local scene, but then you wouldn't have King Kong.