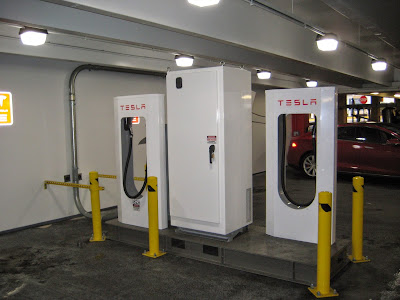 Here's some decidedly un-Bethesda-like news - the Tesla Supercharger, a free charging station for Tesla Model S owners in the Nordstrom garage at Westfield Montgomery Mall, will cease operation on June 30, 2016. Tesla drivers are being directed to a future Supercharger that is being constructed at Laurel Towne Center.

The mall's supercharger had carried a "temporary" label on the Tesla website. But I'm surprised that Bethesda, with one of the nation's highest numbers of Teslas per capita, would lose out to Laurel. These were also supposed to be in key locations on interstates. Removing this one seems pretty inconvenient for MoCo Tesla owners.

For a progressive, green community like Bethesda, this is puzzling news. I'm used to reporting about the latest alternative fuel vehicle or Zipcar station opening, not going backwards.
Posted by Robert Dyer at 5:56 AM

This is very unfortunate, but insiders have known about this for a while. Hopefully Elon can come to an agreement with some decidedly un-progressive management to finally allow the mall's valet parking service to also supercharge Teslas while the owners shop.

And no, I am not going to Laurel town center. Do they really think Tesla owners want to go to Burlington Coat Factory or Old Navy?

Robert please provide backup for the statement that Bethesda is "of nation's highest numbers of Teslas per capita" This seems a bit farfetched.

Robert Dyer said...
This comment has been removed by a blog administrator.
7:55 AM

Is anonymous 7:55 AM on drugs or mentally ill? Please get help.

Anonymous said...
This comment has been removed by a blog administrator.
8:00 AM

Anonymous must be "the lone troll", who gets paid by the MoCo government and Robert's "competition" to post here. Also when large developers such as Equity One need help, they hire this same person,

Oh, this is bad. Losing the Montgomery County supercharger and recommending instead a PG County one? Ouch.

8:31 AM It's the same anonymous unhinged guy. He needs help and wants attention from Robert Dyer.

And Elm says this with so much evidence. Just like his idol Dyer.

8:45 AM Shouldn't you be posting about your poopy pants or whatever today? Or are the meds kicking in and you'll act normal for a bit this morning?

You're a nut. Obsessed with Robert Dyer.

"For a progressive, green community like Bethesda, this is puzzling news."

Montgomery Mall is neither "green" nor "progressive". It's a moribund 20th-Century suburban shopping mall that is several miles from downtown Bethesda.

The mall is in Bethesda. No one said downtown Bethesda.
Yes, the 20817 zip code is Bethesda.

9:00 AM Sadly, you have to treat this "anonymous" guy like a child. That's his mentality in his dazed state.

Robert, would you be interested in interviewing Elon about this? I can make a phone call.

Elm- you are trolling a troll. Get a life.

9:34 AM So you're trolling a troll who trolling another troll?
And you say I need to get a life?

*Who's not who. Use proper grammar next time.

WHAT will Poppy and his family do????????? How will their au pair due without a place to charge while taking the kids to get new Lilly and Under Armour?

I find it hard to believe that poppy can connect Dyer to Elon Musk, CEO of Tesla

6:45AM - Really? You doubt that a fictional character can hook Dyer up with a real, live person? What are you? Sane and intelligent? {wink}