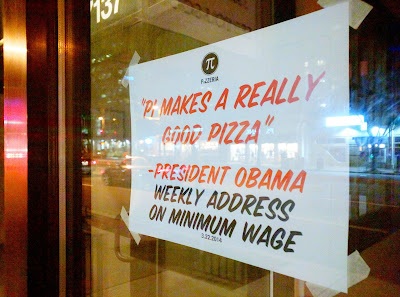 Pi Pizzeria has posted Coming Soon signage, including a few boasts of the famous endorsements it has received from Esquire magazine and the Commander-in-Chief himself. Barack Obama is a fan of their deep dish pizza, and as a Chicagoan, that's not too surprising.

But they will also be serving a cornmeal thin crust pizza. Both types were served at the White House in 2009, a year after Obama first sampled the pizza while on the campaign trail in St. Louis.

In order to serve "the best beer menu" in America, they're going to need a liquor license, and that application is due for review by Montgomery County on April 14.

Want to work at Pi Pizzeria? They are hosting a job fair tomorrow, March 3, and Friday March 4, from 9:00am - 6:00pm at the restaurant. All positions are open. 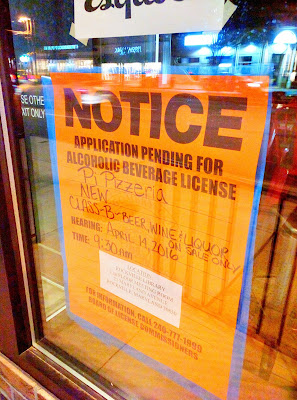 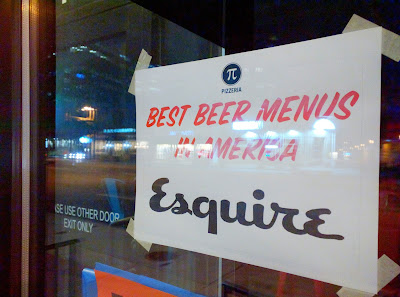 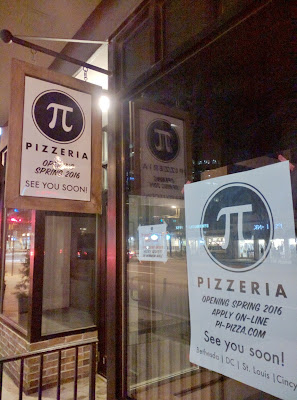 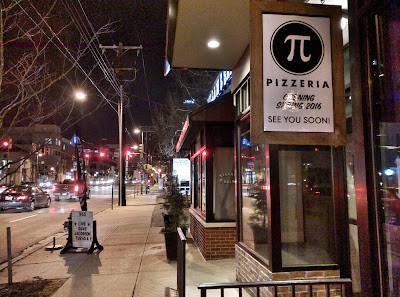 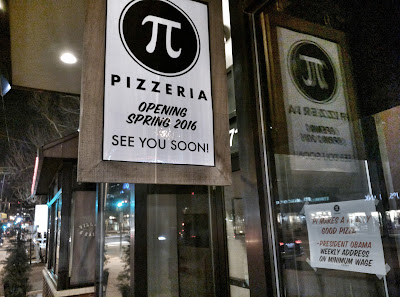 I have heard it's very good but the Obama mention doesn't help. Although, there are so many Lefties in the county, they probably love to see that the King, Obama, loves to eat this pizza. Maybe he'll even stop by. Wait, I just got a tingle up my leg as I wrote that. It won't keep me from trying it but, please.

Anonymous said...
This comment has been removed by a blog administrator.
7:40 AM

The endorsement by Obama will help attract progressives to this pizzeria. I am sure that is what the business owners are hoping for, as us progressives tend to tip more, are more loyal, are better dressed, consume higher end spirits and wines responsibly, smell better and even allow the staff to work surrounded by our intelligent, inspired conversations. I for one am delighted that they are courting us. We need a good pizza place that attracts people who best represent what Bethesda is all about.

I would never go to a restaurant whose name started with "pee-pee".

Republicans would grope the female wait staff, whine about "Mexicans" working in back, babble about Shariah, and leave little or no tips behind.

7:20am, so glad you'll be cured of your ODS next January. Must be quite the burden to suffer from that.

7:48: Pizza parlors are not nightclubs. The nighttime economy initiative was a complete failure. There are less nightspots open after it than before! Bad.

I am actually looking forward to this place. I have been to their location in Chinatown and really liked it.

Looks like Robert "Censorship" Dyer deleted the post about the opening being good for Bethesda, at least he's a high-energy censor!

How is Dyer able to afford country club membership?

So, Dyer, what would you do if you were in office to promote a functional nighttime economy initiative? I've asked this question before and you basically just said you would do what Reimar isn't doing, which isn't quite an answer. How would you make Bethesda better? Because it does need help.

Nightclubs are in decline nationwide. Coffee bars and online dating services are replacing them as ways for people to meet one another. And the increasing desire to live in urban areas has driven up rents there.

Obama Dysfunction Syndrome? Yes, the whole country is suffering from that and yes, next January on election day, will be a great day for the nation when Hillary Clinton rides off into the sunset on her broom.

The site of the failed Pizze and the failed Haven before that. But sponsored content doesn't allow bad karma like that.

You people have a problem for every solution.

So many posts in need of deletion, so little time.

Where do i apply for the job of moderator?

No wonder Montgomery County is in such sad shape. If the posters are really as dumb as they portray themselves, just give up now and move, they'll keep electing their own kind.

8:53am, "next January on election day". Yes, please vote in January. Let your voice be heard.

9:00 AM - Are you asking Robert Dyer to pay you, for something that he does for free?


No mention of pay. There are volunteer jobs in this world that benefit the community. This would be one of those.
Sincerely, 9:00AM

Between Pi and Tappd, Bethesda is for beer.

Everyone knew what I meant.

What was the nighttime economy initiative?

9:42am: We take the most disturbed homeless people from downtown and drop them off on Bethesda Row right before the bars close with $5 and a switchblade.

Aren't journalists for freedom of speech vs opposing it?

Wow and close to Hogan's Purple Line. This will get good business.

If Dyer is running his blog on a for-profit basis, then he would be violating federal labor law by hiring volunteers.

That's a pretty big if.

These comments crack me up!

Yeah but for $22.00, you're stuffed. Not bad when you consider Houston's burger is darn near that price and that's just the burger. We gotta get out of here. This place is too expensive.

Sooo... where is this supposed to be? No mention in the article

Near the women's market, in one of the revolving restaurants. ;)