A four car collision tied up traffic last night at the intersection of Massachusetts Avenue and Cromwell Drive. Montgomery County Police and Fire and Rescue services responded to the scene. No information on injuries, or the cause of the crash, have been released so far.
Ride On 23 was stopped for a long time at the scene. It was unclear whether it had been involved in the collision, or was simply not allowed to divert from its route. 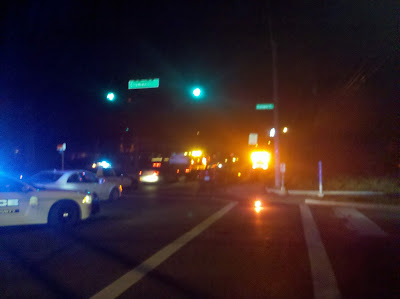 Northbound traffic on Massachusetts was forced to detour at Cromwell. That didn't stop one belligerent driver from running over a police flare, crushing it, and entering the southbound lanes of Massachusetts toward oncoming traffic. "No!!" a police officer shouted at the advancing vehicle. Then others began to follow that car, all running over the debris that remained of the flare.

Eventually, a wrecker arrived to begin towing the cars away.

Get these hulking metal masses off the road! At lease MoCo is doing a good job of getting rid of gas stations in Bethesda.

More casualties in the war on cars. How many cars have to die? Widen the roads give these poor innocent things more space to grow!

Mercedes and Mustang. Figures. You'd never see my Tesla in anything as insensitive and problematic as an accident. Not even when I let the au pair take it to pick up dinner.

@7:07 AM - I hope you are joking, as a car enthusiast I find the Tesla an abomination of a vehicle. You probably don't even know how to change your tires or oil. Go sync your Apple Watch and iPad to your car instead. The only respectful fact about the Tesla is their speed for not having a big V8 or larger engine. And if you didn't know it has been reported that two thirds of all Tesla's will need their drive train replaced by 60,000 miles. I heard those get expensive outside of the warranty.

Breitbart? Go back to West Virginia.

If there were more gas stations and a bridge to the airport this wouldn't have happened. #waroncars #Bethesda #ElectDyer2016

Bethesda has more Tesla cars per capita than anywhere else in the DC area.

7:47: Oh boy. Some car enthusiast you are. My Tesla doesn't need oil changes, silly! Remember, us progressives lead advanced lives, and nuisances that still exist in yours have been engineered out. You might as well attempt to insult me for not knowing how to churn butter.

I'm guessing that he gets a "tune-up" once a year.

@10:30 AM - I made no mention of you not needing oil changes just the observation that you probably don't know how to change your oil. Have fun with paying $20k to have a new drive train put in your precious car. Move on prick.

"Don't we have a hair across our ass this morning, Dolores Claiborne? I insist that all women having hysterics in my drawing room call me by my Christian name."

If you're driving a Tesla as an environmental option, it's like so many liberal feel good solutions; Bullshit!

Not to mention the Montgomery County Fire directive towards accidents involving electric/hybrid vehicles which means any accidents in said vehicles must be properly grounded BEFORE any rescue personnel attempt extraction of any occupants because of the risk of electrocution. Tesla electric sport sedan? No thanks

You'd prefer incineration in a gasoline explosion, it seems.

I am not worked up at that price. I am worked up that he called out Mercedes and Mustang and said "figures" as to elevate himself a Tesla driver above everyone else. The pretentious attitude of their words is so wrong. What are they trying to be the next Al Gore or Steve?

@6:13pm There's a special switch in electric cars for this reason. I have a Chevy Volt and it's bright orange, and under the hood.

8:44 PM - too bad gasoline cars don't have a button which disables the flammability and explosiveness of gasoline, following a crash.

@3:53 AM - Really? Have you ever seen a car "blow up" on impact?? Most cars do not catch on fire and if they do it really takes one to two minutes to become an inferno. This only becomes an issue when someone is incapacitated to remove them self from the car or physically trapped. Also, it is not the actual gasoline that is flammable it's the fumes.

@8:44pm - That switch does not make the system completely safe for the first responder. From a FPE article:

Hybrid systems’ bleed-down times vary among manufacturers but are typically between five and 10 minutes. Consult the ERGs for the vehicle you are dealing with for the specific time frame. Although disabling procedures will shut down the voltage flowing through the electrical cables, they do not bleed down the power from the high-voltage battery, which will remain energized.

Five to ten minutes may not seem like a big deal, but life-threatening injuries or fire certainly make the difference between life and death.

This all goes back to my original post. There is no sense in arguing about the safety of electric vehicles after crashes because us progressive motorists simply do not get involved in crashes. And you wonder why a Mercedes hitting a Mustang did not surprise me.

Only because the tesla will spend more time off the road than on. Limited range + long charge times = less miles.

"I made no mention of you not needing oil changes just the observation that you probably don't know how to change your oil. "

Gasoline fumes are not "gasoline"?

What? You sound desperate.

I walk, bike, and take the bus places. Ban cars.

I drive. Ban pedestrians and cyclists.