Shocker: 7770 Norfolk condos switching back to rental apartments in Bethesda 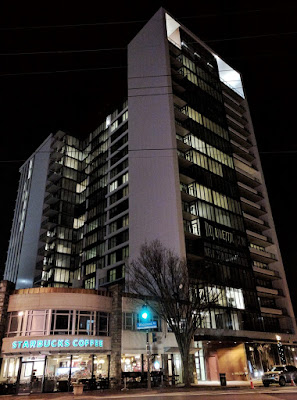 Is the downtown Bethesda condo market showing weakness already? The 7770 Norfolk luxury condo tower has abruptly switched back to its original concept, rental apartments. Reportedly, the market was not responding to the product being offered, despite the pricing that undercut under-construction competitors in the neighborhood, and across town.

Leasing for the apartments at 7770 will begin in February. It was last April when the project was switched from rentals to condos.

A reader informs me that he had been in the process of buying one, with hopes of moving in next month. But the building returned his deposit yesterday.

Sure, because the building was constructed with rentals in mind, the dimensions were smaller than the ultra-luxury condo competitors. But so was the price, with some units starting at under $500,000, in a building that boasts many of the now-standard luxury amenities like a rooftop deck, and is in a prime location.

Competitors include The Lauren, The Darcy, Stonehall Bethesda, Hampden Row, and Cheval Bethesda. A small 4-unit building was already delivered this year on Montgomery Lane, and appeared to be fully sold on delivery.

It will be very interesting to watch what happens as the other condo projects start to deliver next year. And to see if dropping this many new rental units into the market has any impact on so-far-stubbornly-high rents in Bethesda's newer buildings.
Posted by Robert Dyer at 5:00 AM

The prices were too high for the middle of woodmont triangle. I'm glad to see this turned back on I apartments. Even though the prices are going to be expensive too, younger folks need rentals and hopefully the supply catches up to the demand and drives pricing down.

JBG was simply testing the waters. There really isn't much of a market for this type of product. Millennials can't afford the down payment and empty nesters want more space.

Plus it was way too many units for a condo building. It would have taken 4+ years to fully sell. The market can certainly absorb the apartment units though.

It's in a great location...easy 5 min walk to Metro; easy walk to anywhere downtown really.

Either rentals or ownership the prices are going to be tough for most millennials. The rent of these places runs $2,100 + per month for a studio and that does not even include utilities. As other's have mentioned to have the down payment of $75-100k for a small 800 square feet simply isn't the best investment a young person can make in this day and age. If they want to start a family soon than a 800 square feet condo is not going to cut it. Even if one were to put down 20% they would still have to pay condo fee's on top of their mortgage. With so many millennials having student loan debt and salaries that do not match the cost of living in the DC/ DC Area I am not sure what is going to happen to all these properties when baby boomer's retire and downsize or move out of the area.

I still think Bethesda has a decent condo market, but this would be hard for any market to swallow along with the other condo projects that are delivering. This project is still good for the Woodmont neighborhood and I can't wait for Community to open soon.

I bet if they had started from the beginning from design onward that this would be condos it would have been built to be more desirable. As is it seemed to be very apartment like.

When I look who is walking in and out of some of the new developments, it's mostly millenials. $2100+ per month isn't that bad if you consider that most of them don't own a car. That's an additional $500 month available compared to owning a car, insurance, maintenance, etc.

As for starting a family, the statistics show that people are delaying this until later and later, if they have children at all. 47% of all women aged 15-44 are childless, based on recent Census data.

I own a 1-bedroom condo in DC that I rent out for $2400/month. All my renters over the last 10 years have been single people or unmarried couples in the 25-30 age range. They could easily afford the rent, and had jobs like lawyers, or working stable Federal government jobs. Even those with high student debt (lawyers) had high incomes so they could service both their debt and rental payments.

If it was Condos it would probably be a bunch of rentals in 10 years anyway. High end slum lords.

The 7770 condo prices seemed reasonable to me.
1 bedrooms at an inferior building like The Chase have asking prices in the $400s, which is what 7770 was asking.

If you're looking at paying $2,500 rent for several years, then considering buying isn't a bad option.

What is this author smoking? The units were only cheaper if you look at price and price only. When looking at price per square foot this building was expensive as hell compared to others. And on top of that it had horrible lay outs and apartment amenities. The developers were out of their minds to switch at the last second thinking people would pay these prices of low grade finishes and appliances. Not to mention support beams coming right in the middle of your living room.

Even though the prices were "cheaper" they actually weren't. On a price per foot basis they were actually more expensive than the darcy and hampden row. These guys were 800+ a foot in a 800 sq ft unit. Plus it was apartment quality so of course no one would buy it. The developer was a moron. If this was designed from the beginning with condo in mind, he could have sold it if the average in the building was around 700 per foot.