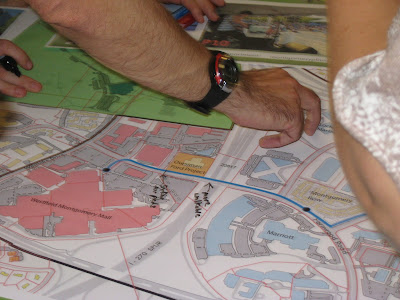 About 50 residents attended a meeting on the Rock Spring master plan update last night at Walter Johnson High School in Bethesda. Apprised by planners of the recommendation by a developer-funded Urban Land Institute "Technical Assistance Panel" (hosted by the Montgomery County Planning Department) to build a new school on the same site as Walter Johnson, attendees did not respond favorably.

During a later break-out session, one resident told planners to exclude the ULI recommendation from the master plan update, because it was not viable. "We're as skeptical as you are," one planner assured her.

Many other issues came up during that break-out session, as attendees pointed out problem areas for pedestrians and drivers, weaknesses in current transit access, opportunities for better connectivity, and concerns over projects already in the development pipeline for Rock Spring.

A number of proposals had wide support among Monday night's crowd. First, many asked for a Circulator bus that could connect all of the properties in Rock Spring to either the White Flint or Grosvenor Metro stations. Some said this option would be more practical and less expensive than the proposed North Bethesda Bus Rapid Transit line.

The existing medical campus on Rockledge Drive also retains strong support from residents. On that, they happen to agree with the ULI-TAP; the panel recommended branding the Rock Spring area as a healthy-living hub around those healthcare businesses and doctor's offices. With its location in the I-270 biotech corridor, the recommendation - and residents' sentiment that they want those offices to stay - both make perfect sense. "Everyone in that area goes to the doctor and dentist in those buildings," one resident noted.

There are several spots where better and safer pedestrian connections are needed, attendees said. Among the primary ones are the bridge over the I-270 Spur, and pedestrian crossings of Fernwood Road between the medical campus and Marriott, Democracy Boulevard and Old Georgetown Road.

One option planners discussed was eliminating free right turns through the "pork chop" corners at intersections. A pedestrian bridge over Democracy is not feasible, planners said, due to the length that ADA specifications require today for such facilities.

While parks and green space are in demand, some residents strongly criticized the existing pond between Rockledge and Rock Spring Drives as "wasted space" and "ugly". It would be much improved by either adding seating areas and cafes around it, residents said, or by replacing the pond with a ball field. One resident mentioned that many of the companies in the Rock Spring offices field softball teams, and that a convenient ballfield could help companies retain workers.

Residents of the neighborhood behind the Wildwood Shopping Center are not happy about changes in landowner Alvin Aubinoe Incorporated's plan to add an apartment building and townhomes near the Balducci's market on Old Georgetown Road.

Originally, a resident told planners, the proposed building was to be 5 stories, stepping down to 3 on the side facing the single-family homes behind the shopping center. Now it's going to be 72' tall, "way too high" next to homes, she said. A secondary proposal to add 4 townhomes facing Berkshire Drive met with similar displeasure from residents, who said it would eliminate the current green buffer their neighborhood has from the noise and congestion of Old Georgetown Road.

"It's very important for us to maintain this barrier behind the Wildwood Shopping Center," one said.

One avid cyclist who said he would like to be able to bike safely throughout Rock Spring said separated bike lanes were crucial to that end. Along with a bike loop, one of the groups advocated for a running loop. And more bicycle parking is needed, according to residents.

Other items on the wish list? A community center, picnic tables, breaking up large blocks into more walkable sections, a new high school site, soccer fields, and perhaps some rehabilitation of the creek that runs through Rock Spring.

One resident said he would "rather see the whole [office park area] dark than overcrowd the Rock Spring schools."

A point everyone agreed on - there's already too much traffic congestion on Old Georgetown Road, and hundreds of new housing units at Rock Spring - and thousands in the Pike District and Pooks Hill -  definitely won't cure that.

At the end of the meeting, the Lead Planner for the Rock Spring master plan process, Don Zeigler, announced he would be replaced by Senior Planner Andrea Gilles going forward. Gilles is already assigned to the nearby White Flint 2 Sector Plan project.

The next Rock Spring session will be on January 28, 2016, as outreach and plan development continue through June of next year. 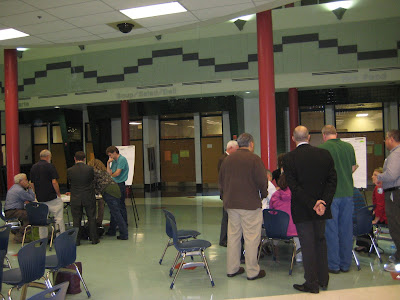 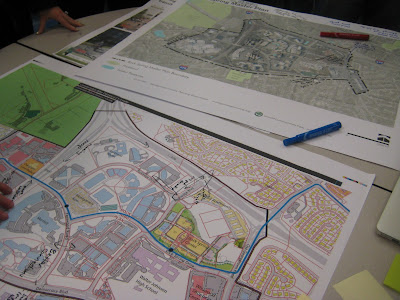 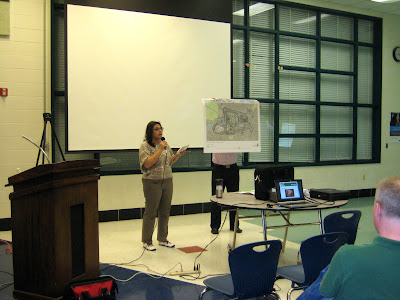 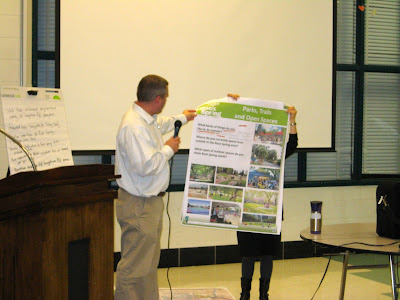 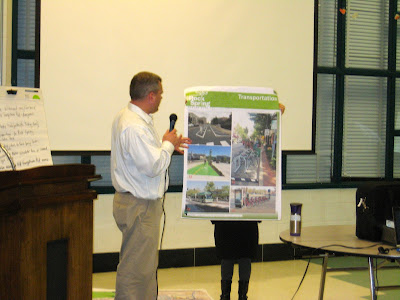 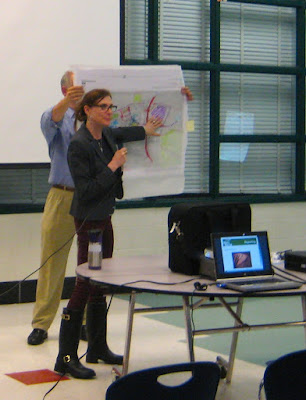 Hopefully the planners can cull and combine to a useful master plan for the future.

I like the Rock Spring Circulator idea. If it also stopped at Montgomery Mall, I think it would be really popular as then it will also be used by mallgoers coming from the Metro, and Rock Spring workers going to the mall and Metro.

re: Anon @7:35 -- well I would disagree a bit. I don't think it would be a good idea to build ANOTHER school on the property site of WJ, what with the existing traffic and all. Better place would be the empty plot of land across the street.

Second, it would be better to put the pressure on MCPS to buy out the leases on some of the closed schools they rent out, and reopen them. Yeah that is problematic in itself but that may be the better solution.

Let this area rot. If they are going to be intransigent then let them be an industrial office park slum.

Who opposes building new schools? Almost no one besides developers who don't want to wait/pay for them. The county could use all the schools it can get.

If only there were large parcels of land in Bethesda that could be used to solve the school overcrowding issues. Wait, there were, and they were all sold to developers.

Yes, lets make traffic in the most congested part of the county WORSE by removing right turn lanes. That will surely solve the problem.

Are we ok with paying more taxes to fund paying for land?

Which by the way the seller can sell to anyone they want, including the highest bidder.

That isn't the county's fault in any way.

Speaking of right turn lanes - why the heck did they make Connecticut southbound right turning onto Jokes bridge a no turn on red!?!?

@ 5:47 - No turn on red? With all that Beltway traffic? I haven't been there in months. I'll keep avoiding.