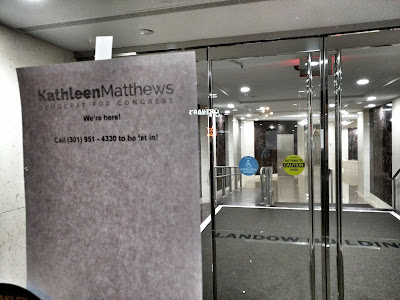 I noticed this sign on the door of the Landow Building in downtown Bethesda - maybe a campaign office or just a one-time event for the congressional campaign of Kathleen Matthews? Her website doesn't mention an office address.

Former Lt. Gov. Anthony Brown had one in a retail space on Wisconsin Avenue in the nearby Fairmont Plaza condo building in 2014. Both buildings were developed by prominent Democratic contributor Nathan Landow, who has built quite a few nice ones downtown, as well as the resort-like Promenade at Pooks Hill.
Posted by Robert Dyer at 7:00 AM

Question: What Is 'Ermahgerd'? What Does It Mean?

Answer: 'Ermahgerd' is 'oh my god' as pronounced by someone with a speech impediment. It means 'shock' and 'stupidity' at the same time, often as a caption for unflattering photos. This modern derogatory expression has come about as both a meme and a verbal expression of 'stupidity'.

You can caption 'ermahgerd' on your own photos to describe that you did something stupid today, or you can use it to insult someone else by replying 'ermagherd' to their online posts.