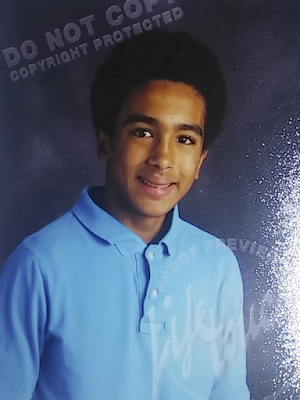 Missing Pyle Middle School student Nathaniel Castro has been located by police in Bethesda. He was reportedly found at Bannockburn Elementary School. Scanner reports stated that he is returning home, and the critical-missing alert has been canceled.

Police have contacted the Montgomery County School Board to ask if any security alarms have been triggered at an unspecified list of schools tonight. A representative for the Board said no alarms were recorded. They are now searching schools and playgrounds in the area to find out if missing Pyle student Nathaniel Castro "is sleeping" or hanging out there.

11:50 PM 12/3/15: Montgomery County Police following vehicle from Pyle Middle School into D.C. to Fessenden St. NW at River Road NW, and then to Wisconsin. Missing child's father told police he saw "bicycle handles" in the back of the vehicle. Unconfirmed: Vehicle described as a "Fox 5" news reporter's vehicle. Police are also looking near the intersection of Fallen Oaks Drive and Valley Road in Bethesda.

11:41 PM: Police have received tip that a door is unlocked at the Bannockburn Community Clubhouse. Officers are en route. Elsewhere, police have searched Bradley Boulevard between Fallen Oak Drive and Goldsboro Road, and have found no sign of Nathaniel Castro yet.

11:30 PM - Scanner report: Police have reported sighting of child riding "toward Bradley Boulevard" on bike matching the description of Nathaniel Castro's, and are investigating. They are going to follow "the route he would have taken home" toward Pyle Road.

Montgomery County Police and a Maryland State Police helicopter are searching for a Pyle Middle School student who has been missing since 4:00 PM in Bethesda.

Nathaniel Castro, a 7th grader at the school, was last seen when he left his home in the 6600 block of Pyle Road to ride his dark blue mountain bike Thursday afternoon around 4:00 PM. He did not have a cell phone, according to an email circulating in the community.

Castro is described as being 5'6" and 125 lbs., with light brown skin, brown eyes and hair, and was wearing jeans, a blue zip up hoodie with a lime-green lining, a grey t-shirt, and red high top Nike Lebron James sneakers.

If you see him, or have any information on his whereabouts, call police immediately at 301-279-8000.

The state police helicopter has been circling over Bethesda. According to scanner reports, they have searched MacArthur Boulevard down to the DC line, and are using thermal imaging. That area turned up no sign of Castro.

Search team leaders asked the chopper pilot to canvas Bradley Boulevard from River Road all the way into the Central Business District of downtown Bethesda. The helicopter also was searching neighborhoods along River Road near the District line.

Scanner reports referred to a navy blue-colored "specialty bike", and suggested checking an unidentified "construction house" to "see if he's hiding in there." It's unclear who "he" was referring to, or if this was connected to the search.
Posted by Robert Dyer at 7:52 PM

Expect to read reporting of this on the "other website" 8 hours from now. Dyer got the scoop, as usual.

Glad he's safe and I hope the family can address whatever's going on. I can't imagine how frantic they must have been.

@10:03 your comment is useless. If Dyer's blog is superior to the other sites, then his work will speak for itself. It's petty and embarrassing to have this kind of inferiority complex.

I like when a minor is a suspected criminal or victim their name and business is not released for very good reasons. But then a situation like this all the dirty laundry about a kid is sensationalized like a celebrity in a tabloid. Maybe once you find the kid you can scrub the identity for the same reasons we do for juvenile victims and suspects. Not saying this is a Robert only issue, but seems a shame that this article will come up about this kid in the future.