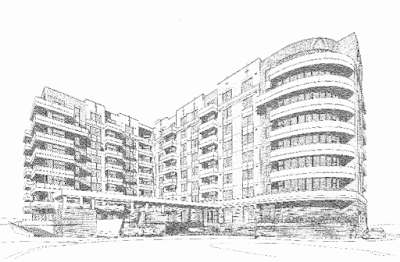 Rumors have been swirling that the applicant who has approval for a 97' tall senior housing development on the site of the Washington Episcopal School may be reconsidering the age limitation on that project. Sheridan Development Group had already requested a delay in its project plan review and a site plan amendment. The former was ostensibly to allow more time to complete a traffic study.

But the already-controversial project has gotten even more controversial, as an attorney representing the surrounding neighborhoods has concluded that the Westbard Sector Plan update could strip zoning restrictions agreed to for the project. Most notable among those, is the binding element requiring the building to remain age-restricted. They also include a proposed traffic light for the intersection of River Road and Landy Lane.

Attorney Norman Knopf says that, while the binding elements for the WES project survived last October's zoning code update, they "no longer must be satisfied once the property is subject to a Sectional Map Amendment implementing a master plan." An SMA would be part of the adoption of the new Westbard Sector Plan, the rewrite of which is currently underway. The provision that would allow the binding elements to be stripped is found on page 7-40 of the zoning code.

As such, Knopf said in a letter to the Montgomery County Planning Board, the Board and County Council must ensure language in the new Sector Plan specifies that the Sheridan/WES development site retain PD-28 zoning. Knopf represented 19 citzen associations during the local map amendment process that resulted in the 2008 WES project approval.

Knopf is asking the Board to take up the matter during its Westbard worksession this Thursday, which is expected to be dominated by park and environmental issues, and the naturalization of the Willett Branch stream.

To add to the drama, the WES project is now on the agenda for the December 10 Planning Board meeting.

The WES project proposal currently contains 121 senior housing units, for residents 55-and-older. It will produce an estimated 236 vehicles under the latest FHWA and Census numbers of 1.95 vehicles per household. That number could jump to 276 under the February 2015 study by Experian Automotive, which collects and analyzes automotive data.

At 8-stories, the building would rise high above single-family homes in the adjacent Kenwood neighborhood.

As we've seen before, the Planning Board does its "best work" when residents are busy with holiday shopping, events and travel.

Rendering via Montgomery County Planning Department
Posted by Robert Dyer at 7:00 AM

Makes sense they would get more work done unencumbered by special interest groups and NIMBY's.

Well this is the time a year where many non-retail work places seem to slow down. Less meetings. Less deadlines. Less new projects. Less consulting. Makes sense to me that the planning board would have more time to put their attention to these matters.

"To add to the drama [says the Insane Drama Queen], the WES project is now on the agenda for the December 10 Planning Board meeting.

"As we've seen before, the Planning Board does its "best work" when residents are busy with holiday shopping, events and travel."

Which raises the question - when does Dyer do his "best work"?

And Dyer would find some pretext to complain if the Planning Board DIDN'T schedule a meeting in December.

There is an 809 feet high radio transmission tower in that neighborhood, and Dyer is complaining about an 8-story building?

8:37: That tower has been there for 50 years or more,is sited away from single-family homes (it's in the industrial zone), and adds no cars or school-aged children to overload the inadequate infrastructure. It is also one reason why the rental apartments and condos in the area are so low-priced. Area residents, such as myself, are all for more development but want a balance with services, green space, and better mass transit options. Cramming another thousand or two residents and cars into this relatively small area (with already overcrowded schools) is not an attractive option. This is NOT a case of NIMBY - it's a desire for intelligent growth.

Since this site 1/2 block away from a 17 story Condominium and 4 or 5 blocks from single family homes, 8 stories seems to strike a good balance. The site straddles the cap crescent trail so I never understood why it should be limited to older people who are less likely to hike/bike. I guess the fancy Kenwood neighbors are worried if the project is opened to younger people who may have kids their own kids might have to go to school with kids who live in apartments!

9:59 - There are many local kids in the apartments and have been for years. Kenwood Place was built in 1960 so it's not a new addition. Don't be a jerk.

9:59: Remember, the high-rises scattered across the Westbard area are non-compliant with current zoning code. As non-conforming structures, they are grandfathered in, but cannot be used to justify new ones.