100 Montaditos has closed at Bethesda Row. The restaurant announced the closure on its Twitter account this afternoon.

Obviously, that was not the case. 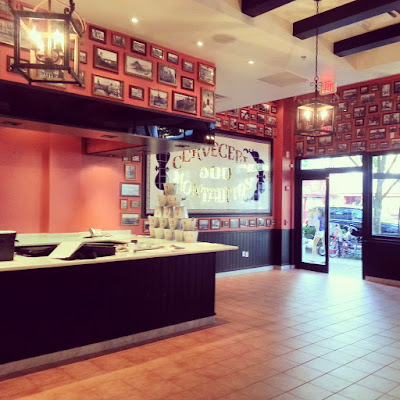 Aw that was a fun spot. Different from the norm. Will miss it.

The place was poppin Saturday night. Surprised they closed.

How come Dyer only gets to take pictures from inside places, after they've closed?

4:42: "It's good to be thickheaded." Forget about the hundreds of establishments that have been represented on here with interior photography - what makes a knucklehead like you post an asinine comment like that 8 hours after I posted extensive interior photographs of the new Pottery Barn? Sounds like you are indeed "Dumass material."

This place was destined to fail. Confusing concept, confusing food. Menu too long and nothing special on it.

Definitely no tears shed when they go. Any word on who will take their place? What about the now-closed Boloco next door? Any news on their replacement?

Dyer, stop feeding your troll every damn day. You're the "dumass" if you don't realize you're exacerbating the problem.

Unknown said...
This comment has been removed by a blog administrator.
12:17 AM

Dyer actually engages his readers (and doesn't use the royal "we"). Great concept, other sites could learn from that.

By engaging you mean insulting his readers and insisting no other opinion but his counts, and counts as fact?

7:28: I've never insulted a reader, only spammers and trolls.

So you only insult people you don't agree with or who don't like or agree with your opinions. Makes sense, of course.