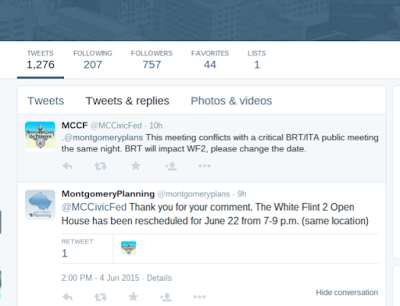 It has come to my attention that the public open house for the launch of the White Flint 2 Sector Plan has been rescheduled to Thursday, June 25 at 7:00 PM. Based on a tweet from the Montgomery County Planning Department, I had previously reported the new date was June 22. The meeting will be held at Luxmanor Elementary School (6201 Tilden Lane) in Bethesda.

The plan will cover the area roughly between Montrose Parkway and Twinbrook Parkway along Rockville Pike, and includes multiple shopping centers that may be redeveloped.

I'm including a screen capture of the official County planning department Twitter account's tweet of the wrong date above. The event was moved when the original date conflicted with a public hearing on the highly-controversial Independent Transit Authority proposal.
Posted by Robert Dyer at 5:00 AM

"It has come to my attention that..."

Why don't you credit your reader who told you this?

7:10: Because he or she posted anonymously in a comment. You're just the same troll, always complaining about things no one else is even thinking about. Yet you never post a nasty comment on competing websites for egregious actions or errors. How interesting.

Anonymous said...
This comment has been removed by a blog administrator.
7:59 AM