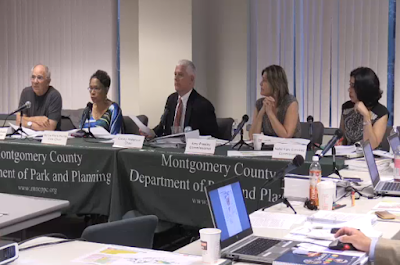 What height buildings should be on which streets continues to draw a wide variety of opinions. But Bethesda residents speaking at Wednesday's Bethesda Downtown sector plan hearings were pretty clear on two points - they don't want a new building on the plaza at the Bethesda Metro Center, and they don't want a new road paved through Battery Lane Park. Both proposals are recommended by Montgomery County planners in the current plan draft. The Montgomery County Planning Board took testimony from the public at two sessions yesterday.

Bob Eisenberg made a point that speaks to both the past and future uses of the Metro Center plaza, and downtown Bethesda in general. He noted that he and his family "all too often have to look outside of Bethesda" for larger scale events. Other than the Taste of Bethesda and several street festivals that are primarily arts-related, we've continued to lack a St. Patrick's Day parade and an Oktoberfest, for example. And in the past, the Metro plaza was used for larger gatherings such as Fourth of July fireworks, and a Christmas tree lighting. Eisenberg said he opposed "eliminating this key public space," and also chastised planners for including a specific footprint for a 29-story building on it. He noted that master plans don't typically include building footprints, and asked them to remove the footprint shown on page 97 of the draft.

Another downtown resident recalled the golden age of the plaza, as well. Once home to a food court, the plaza was ideal for "lunchtime enjoyment" by workers. He said the ideal plaza would be one that continued to have an open design. With insular plazas, he argued, you're "not sure you’re safe there." Ultimately, he said, "plazas make the development. The development is not going to make the plaza."

"When my friends come to visit Bethesda, I want them to see a vibrant park area," a third resident said. "I’d like to see Metro plaza return to what it was originally designed for," he said.

An issue that drew equally-strong emotions from residents was the proposal to run a new road through Battery Lane Park.

Sandra Purohit brought a petition signed by 70 downtown residents who oppose the park road plan. Her observation that, if roads enhanced parks, the green space along I-95 would be the most popular on the east coast, drew chuckles from the crowd. Speaking to the county officials' frequent calls to make Montgomery more friendly to young professionals, Purohit advised "If you’re looking for millennials, they’re in Battery Park." One commenter on this blog previously noted there is a bocce league popular with young people that uses the park.

Purohit noted that Bethesda residents are "progressive, [and] want to live in a place that reflects progressive views," including on the environment. Water quality in Bethesda streams is already "poor to fair" as it is, she said. "We don’t just need park acres, we need quality park acres," she argued.

Another 25-year resident of Battery Lane said she and 12 other residents also oppose the park road plan. She said many mature trees would be lost, and air quality would suffer. A road would represent "loss of a green, quiet oasis," she said. Battery Lane Park is a "well used park all hours of the day, she reported, noting that people “stroll through, they don’t hurry through, they’re not dodging traffic," as they would if a road was added.

Ana Maria Mutter, resident manager of Battery Gardens, concurred with her neighbors in opposition to the park plan.

A number of other resident and developer concerns were raised during the hearing.

Attorney Jody Kline said the plan as drafted would not facilitate the redevelopment his clients proposed for the north side of East-West Highway between Our Lady of Lourdes and Bethesda-Chevy Chase High School. Their vision for street frontage along East-West is threatened by less-than-sufficient density recommendations for their sites, Kline said.

Jad Donohoe of The Donohoe Companies, who is also Vice Chair of the Western Montgomery County Citizens Advisory Board and grew up in Bethesda, commended planners for their recommendation to convert one-way streets into two-way thoroughfares. The change would be "a good thing for building owners, merchants, and pedestrians," Donohoe said. He wasn't as positive about the plan's density recommendation for Donohoe's property at 7400 Wisconsin Avenue, the historic post office. Donohoe noted that the property is "directly atop Metro, but we haven’t received any increase in density in this plan." He also said there are insufficient incentives in the current plan draft for developers to utilize density transfers, which Donohoe has done in the past.

Deborah Ingram said the 250' building height proposed along Wisconsin from Waverly to Willow was incompatible with the established, single-family home residential neighborhoods behind them.

A resident who lives near the proposed park across from Bethesda Elementary School had several concerns about the plans for that site. She said adding seating would attract adults and loiterers to the park, and pose a threat to children. The plan to demolish a county-owned home right next to two other occupied homes would divide the neighborhood, she predicted. She also opposed plans to light the park for night use, arguing the park should close at dusk.

Finally, a resident of Nottingham Drive in Chevy Chase West said she opposed the proposed redevelopment of the Bethesda Fire Department station that borders her neighborhood. "I feel strongly that Bethesda downtown should end at Bradley Boulevard. CR zoning…has vast uses, and would be inappropriate for this edge property."
Posted by Robert Dyer at 5:00 AM

I understand citizens can influence decisions by public opinion and voting, but it's funny how many demands they make and rights they think they have in regards to someone else's private property.

It is a good article!

It's funny cause Clark doesn't have anything to do with that land. They just don't want their neighbor to build on it. What a shady campaign that sullies the good Clark name, may he rest in peace. These folks at Clark should be ashamed of themselves for playing so dirty.

It may be senseless to offer this vantage, but here goes: In many cultures as diverse as England is from Japan, there has been a deep sense of responsibility which accompanies advantage and power. When a landowner made a decision that would impact those lacking any control over the situation, a respectable owner made decisions reflecting a consideration of the overall welfare of his community. This mindset was was considered mature and responsible.

Something went awry in America. It's the darker side of independence. Sure: No one can tell you what to do with your land. We got so selfish. So yes: Technically, you are correct that the land is not Clarke's to envision.

Morally, however, the Clark plans reflect an environment that the community would likely embrace and be so thankful for. The owner company's rendering avoids showing that they plan to put a tall building on a chunk of that space. Why hide it if there's nothing unconscieanable involved?

Who really is off? The one that says, Don't scrutinize me, I have the power and I'll do what I want! Or the observer that points out, Or you could make something truly memorable for the entire community.