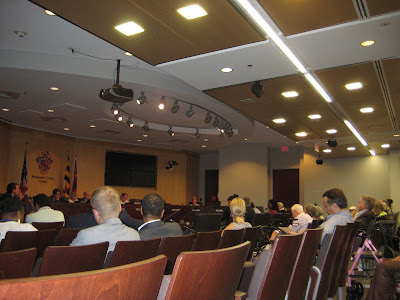 Last night, the Montgomery County Council held a public hearing on Council Bill 19-15, which would boost the power of renters in several ways. As currently drafted, the bill would require annual inspections of rental properties unless they have an exemplary inspection record, require use of a standard uniform lease document, require more data - including on rent increases - to be made public and posted online, give the county Commission on Landlord-Tenant affairs greater ability to intervene in certain disputes, and give renters more options - with less penalty - when their leases are up for renewal. These include being able to go month-to-month without penalty of additional fees. However, some changes to Chapter 29 regarding leases would not be applicable in certain municipalities, including Rockville, Gaithersburg and Takoma Park.

The bill was introduced by Councilmember Marc Elrich (D-At-large), who was thanked by several speakers for his work on the legislation and with the community on these matters. It is co-sponsored by Councilmember Nancy Navarro (D-District 4).

One prominent supporter of the bill is Maryland Sen. Jamie Raskin (D), who is also running for Chris Van Hollen's seat in the 8th Congressional District. A member of the 2010 county Tenant Work Group, Raskin said the bill would avoid the most controversial proposals of that group while establishing "some semblance of fairness" to those receiving excessive rent increases. He predicted that despite the new regulations proposed, the "rental market will continue to operate and thrive" if the bill passes.

Jill Ortman-Fouse, a member of the Montgomery County Board of Education, also testified in favor of the bill. She said her experience as an education activist, and interaction with students from low-income families, has convinced her of the importance of stable, well-maintained housing. "Decent stable housing contributes to academic outcomes," she argued. Recalling a visit to a student's apartment, she said that despite deplorable maintenance conditions and vermin, the child's perfect attendance awards were proudly taped up on the wall. Ortman-Fouse said that with passage of the bill, "parents can reasonably budget for rent without surprises."

Another local official, UFCW Local 1994 MCGEO President Gino Renne, said "we all deserve to know accurate information from licensed landlords." Renne decried "ridiculous rent increases of 10. 20, 30% over the standard," voluntary rate of increase. In supporting the bill, he also noted that the county is "losing affordable housing units by the hundreds each year." Renters shouldn't be treated as "second-class citizens" versus the "landlord lobby," Renne said.

Clarence Snuggs, representing County Executive Ike Leggett, wasn't quite as enthusiastic. While Leggett "supports the legislation generally," Snuggs suggested the cost to the County of inspecting every rental property annually would exceed "current and future budget levels." He said Leggett recommends allowing the flexibility of "landlords and tenants to draft their own addenda" to leases. Snuggs also thought the allowance for 2 months of continued occupancy after the end of a lease was contrary to state law.

Meredith Weisel, a VP at the Greater Capital Area Association of Realtors concurred that portions of the bill conflict with existing law, and argued that much of the legislation would be "overly burdensome" for landlords. She said making rent increase data available online would "publicly shame landlords." Weisel said those increases are "made to look excessive", but are actually driven by market forces.

Also on the critical side - while not outright opposing the bill - was Robert Goldman of Montgomery County Housing Partnership, who said "some of the details of the bill go beyond consensus" on landlord-tenant reforms. "We must make the guidelines reasonable," he proposed. Goldman suggested tightening the language about what specific infractions, or lack thereof, would differentiate the need for an annual inspection versus 3-year inspections. It would be helpful to specify a "severity test for code infractions," he said. What if a tenant removes the battery from a smoke detector, Goldman asked rhetorically. Would that trigger an annual inspection even if the landlord was not at fault?

The most emotional testimony came from renters themselves, who told of whopping rent increases, unhealthy living environments, landlord retaliation, and the stress and struggle of being a renter when income is moderate or fixed.

"My wife and I are feeling like Luke Skywalker trapped in the trash masher, with the walls closing in," said James Perry, a renter in Silver Spring. Perry said his rent has increased by 3% since last year, and that he and his wife are spending "slightly over half of what we bring in monthly" on rent. Some of his neighbors down the hall have been hit with rent increases of 5-10%, he said. Passage of the bill "would take a load off my shoulders," Perry said, and give him data he could use to comparison shop for another apartment.

Jheanelle Wilkins, another Silver Spring renter who is a member of the Montgomery County Young Democrats, said many tenants are initially fooled by temporary low rents when they sign a new lease. Wilkins said she herself has received the "dreaded letter" from management advising to renew the lease or face surcharges going month to month. She also said annual inspections are important.

Janet Lipman, 72, had an affordable rent to start, but it increased several percentage points over the county's recommended voluntary amount annually. Recently, she said, it was a 6% increase when the county advised 2.8%. Her parking also went up to $90 a month, requiring her to take on a part-time job even though she had retired. The alternative, she said, was paying a 22.6% increase on a month-to-month extension.

Another Young Democrat, William Roberts, said he was priced out of downtown Silver Spring. Roberts said the bill would better inform tenants of their rights, and add transparency.

Joyce Hymes, a retired GSA employee who has been a renter for 50 years, said landlords "deserve a fair return on their investment," but that renters also have a right to affordable and well-maintained housing. She said more than half of her monthly income goes to her rent, and that her electric bill was recently broken out from the monthly rent as well. Hymes said her landlord retaliated against her by threatening eviction after she reported code violations to the fire marshall. She said she only avoided her eviction after the Montgomery County Renters Alliance intervened. "Thank you, Marc Elrich, for caring," she said, suggesting the bill would create "a more level playing field" for renters and landlords.

Also renting in Silver Spring was Jessica Simon, who said she was offered a 4.7% rent increase, or a 64.5% increase with a month-to-month lease. When she asked her landlord for the county's suggested rate, he told her there is no negotiating. She asked the Council to pass the bill "to demonstrate you want renters to stay and thrive in the County."

Zorayda Moreira is used to helping others through her work with CASA. But as a renter, she herself has "had to challenge them so many times [even] with my background." She said the bill "incentivizes good behavior" by landlords, and added that she hopes "this is the beginning of the conversation, and not the end."

Laurie Chin, also a member of the Young Democrats, said "this legislation matters." She said posting rent increase data would discourage excessive hikes. "Not everyone [in Montgomery County] lives in a $1 million house in Bethesda," she noted.

Latasha Harris told of living with no air conditioning at Kensington House, where she is VP of the newly-formed tenant association. Harris said there is mold on walls, ceilings and air conditioning units in the apartments. There is also an uncertified elevator, she said, and cited an 84.3% rent increase in the last 5 years.

In response to Harris' testimony, Councilmember Nancy Floreen (D-At-large) asked Snuggs - the County Executive's representative - to have Leggett investigate complaints about the building.

The legislation will now be discussed in a worksession.
Posted by Robert Dyer at 10:00 AM

Landlord here. It sounds like a lot of items were not though through:

1. There is already a standard lease for use in MoCo, here it is:
http://montgomerycountymd.gov/DHCA/Resources/Files/housing/landlordtenant/lease_single-family.pdf

Note it already covers most issues brought up, including smoke detector where the tenant did not replace the batteries.

2. Landlords already pay an annual licensing fee of around $90/year to have a rental property. I'm not sure what it goes to cover -- would the new inspections be a part of that?

3. If a tenant has mold in their apartment or other bad conditions, they can already go through the county (DCHA) to get this handled, since the landlord is already required to maintain the property. We don't need a new law on this.

4. Will these rules apply to small landlords as well as large ones? Someone who just has 1 rental property might find all these rules too onerous.

5. If limits are placed on rent increases, and the market rate is higher, then the landlord will simply choose to not renew the lease at the end of the term, and the tenant is out anyway. I think allowing the free market to determine rent, as it does now, will actually work better -- maybe the tenant is fine with paying the higher rate.

6. No protections for the landlord here. In MoCo, it takes 8-12 weeks from the time the tenant stops paying rent to the time the Sheriff shows up. It's 4-6 weeks to get a court date and get the eviction order approved, then 4-6 weeks to get the Sheriff to turn up. In Virginia, it's 3 days from the time of the court order, and the court orders go much faster. Keep in mind the landlord is paying all these entities (court and sheriff) for this "service", but it takes forever. The Landlord-Tenant Court is not even computerized -- you have to fill out a 4-layer carbon-style form and mail it in. No online case tracking nor submission.

Will there be a follow-up hearing on this?

Will this legislation also apply to accessory apartments, including those within single family homes?

12:13: There isn't currently a second hearing announced, but you could still submit written comments. They will be discussing all of this at a worksession this summer, and I will post further details as they are announced.