PAUL Bakery opening June 22 in Bethesda. But -shh!- you might want to stop by sooner... (Photos) 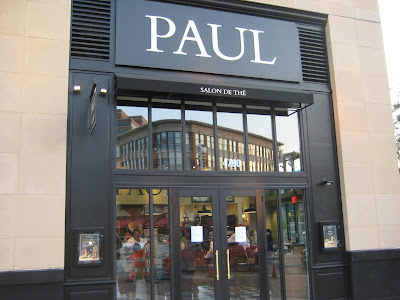 PAUL, the long-awaited French bakery and café at 4760 Bethesda Avenue, will officially open on Monday, June 22. But if you just can't wait for that, my hint to you is to stop by anytime between now and Monday, and you might just get in - and maybe even get something for free. That's because they are training the employees, and holding "soft opening" hours that will vary prior to the opening on Monday. Depending what they are working on, you might have to pay, or you might get something on-the-house.
Phillipe Sanchez, President and CEO of France-based PAUL's US Division, said he was particularly excited about the opening of the Bethesda store. On hand for a private family-and-friends event Thursday at the bakery, Sanchez said his enthusiasm is related to the fact that Bethesda Avenue was the first location chosen by PAUL when it decided to expand to America in 2011. Because the Lot 31 project (including PAUL's home, The Flats at Bethesda Avenue apartments) wouldn't be completed for another four years, PAUL's DC locations opened sooner.
After thanking the PAUL Bethesda team, Sanchez toasted the impending opening with a flute of Brut Champagne. He noted that the Bethesda store's General Manager Jay Urbano is a veteran of PAUL's now-competitor La Madeleine. Others in attendance included PAUL's worldwide executive chef and baker, and representatives of Bozzuto, the firm that manages The Flats at Bethesda Avenue.
PAUL will be open for breakfast, lunch and dinner, with initial hours being from 7:00 AM to 8:00 PM Monday-Thursday, 7:00 AM - 9:00 PM Friday and Saturday, and 8:00 AM to 7:00 PM Sundays.

With Quiche Lorraine, nos oeufs, and a good cup of coffee, this sounds like the new breakfast spot in downtown Bethesda. Add in a French newspaper - print or on your smartphone or tablet - and once again this part of town provides a staycation escape to Paris. As Sanchez has noted, the bakery recipes here are the same as those you would buy on the Champs-Élysées. 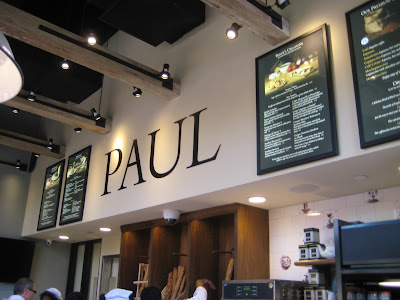 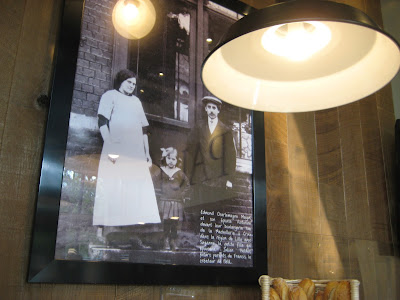 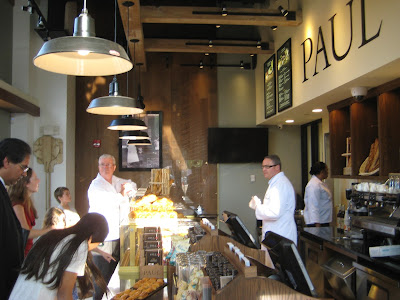 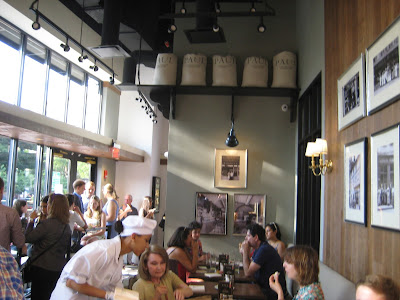 PAUL is in a prime location, as well. It's right near the Capital Crescent Trail exit of the public parking garage beneath it, and right alongside that popular trail for those walking, jogging or biking. The 2000 SF café has space for 60 indoors, and 20 on its outdoor patio. They will also host events and offer catering. 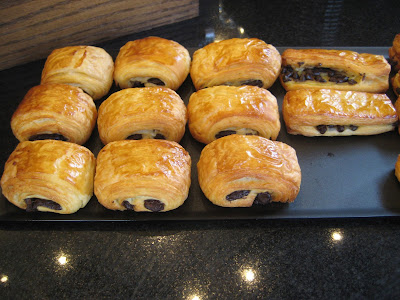 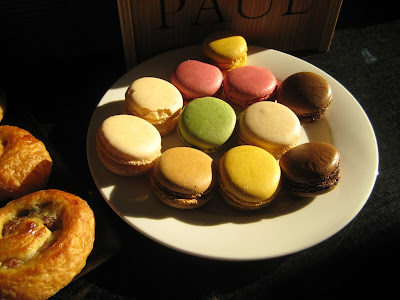 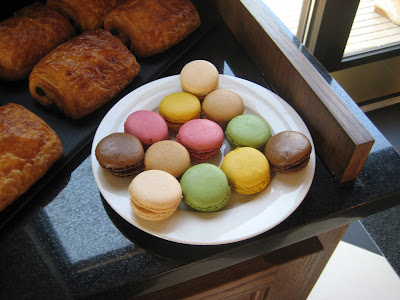 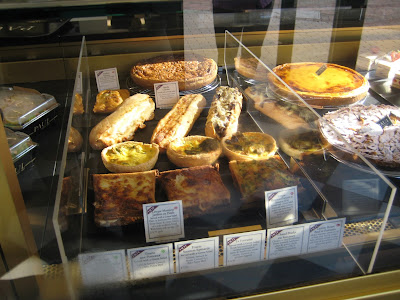 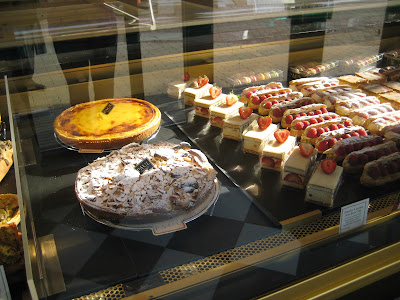 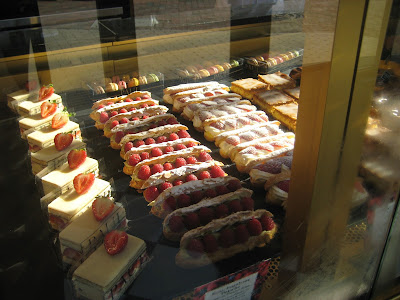 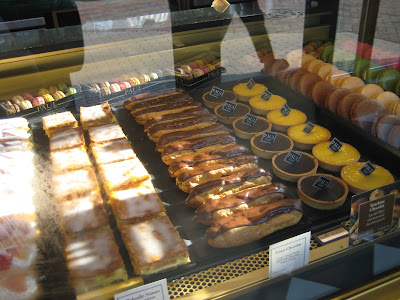 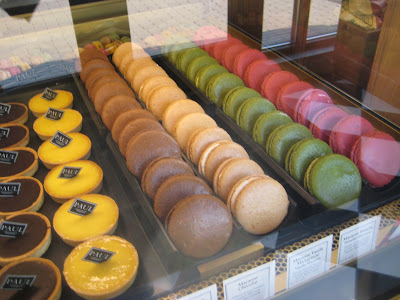 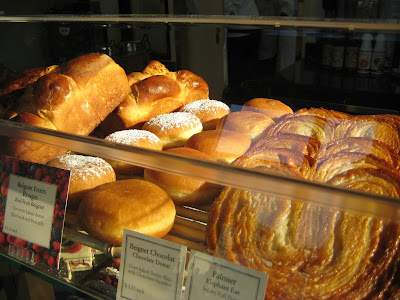 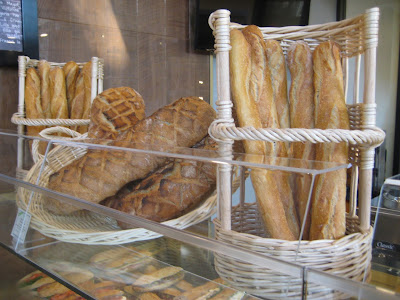 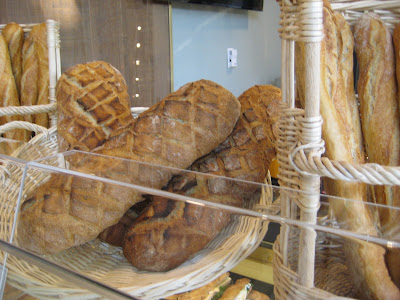 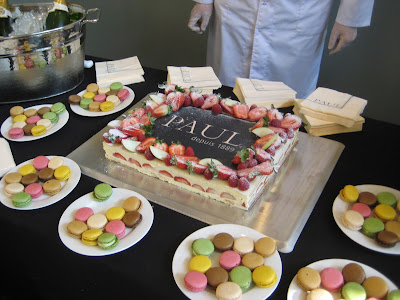 You report on this and not &Pizza's soft opening where people could get free pizza and pellegrino!?? This place looks lame #PIZZA4EVA

5:08 It is lame. The several DC locations are repeatedly hit for health code violations, even WUSA-9's Russ Patacek has several stories on them. Beware!

Yeah their DC store got a health code violation as recently as about 2 weeks ago -- it was in the paper.

I don't trust anyone who feels the need to display their name in PAUL-CAPS.

There must be something I'm missing here because what is with all these negative comments? I've been a resident of Bethesda for a few years now and Robert Dyer's blog has been a great source for local information such as store openings, closings, events and other for me. I was wondering when the PAUL would be opening and am grateful that Mr. Dyer shared with us what he knows. Also, for those of you wondering, the violations for PAUL on Penn. Ave. were the temperatures in which the ham and chicken were stored and the lack of a food protection manager on site, all of which has been remedied since then. I'm actually quite looking forward to the opening of PAUL in Bethesda. (It's interesting to hear that Bethesda was originally supposed to be the bakery's first location in the US.)

Wrong temperatures on meat and lack of a food manager on site aren't major items, but it's a sign of possible greater sloppiness.

As for Dyer's news, looks like another competitor just shut down as they couldn't compete:
http://www.bizjournals.com/washington/news/2015/06/12/report-washington-post-to-close-montgomery-county.html

Their quality was laughable -- they report on most stories about a day later than anyone else. Dyer usually has the first report of just about every major story in Bethesda.

The Gazette really couldn't compete with Dyer on news. They published weekly and basically reprinted the newspaper articles online once a week. Meanwhile, Dyer publishes in real time and is the only MoCo media outlet to publish daily.

I think Dyer's dead competitors (Gazette, Patch, Bethesda NOW) never adapted to the reality that folks get their news on mobile devices first. I still think the Gazette had some value. Jeff Bezos didn't think so I guess.

Back in the day, we just had The Gazette and Bethesda Magazine. People just aren't reading newspapers and glossy magazines as much.

Don't worry about them.. yes, this blog attracts a lot of trolls and haters, just ignore them...
Thanks to Robert Dyer for keeping us updated on opening/closing... I may fundamentally disagree with some of his political opinions, but I agree that he is doing a pretty good job as a local blogger. That is all I need.

Concerning Paul, had lunch and pastries dozens of times from them in the District and in France, I have nothing to complain about... They are trying to re-brand themselves a little bit more fancy than they are originally (a take out bakery), but it is fine.
Their pastries won't have the quality of those from Fresh Baguette or Tout de Sweet, but it can only be better than La Madeleine which as nothing french but the name...

Speaking of Bethesda Magazine, I was at an event where they were trying to get people to subscribe to the paper edition, so they had a few on display. Those things are 400 pages long, of which 350 pages are advertising. No way I'm _paying_ them to deliver me a book full of ads.

....and yet another post on the overwrought "moribund MoCo economy" meme.

Peter, has a Fortune 500 company announced it's moving to Montgomery County since your comment yesterday? No? Then it's hard to argue the county economy is any less moribund today.

Anonymous said...
This comment has been removed by a blog administrator.
5:05 PM

Dyer does a hyper local blog well. Gazette was a local newspaper. Not totally competitors but I get the attempt. Dyer's blog is a fun hobby. One was a business that needed to generate profit.

I do not enjoy seeing local businesses fail, but if what you write is true, then it says much for Mr. Dyer's dedication and talent for serving this community as such.

Folks comparing Dyer's blog to a newspaper are severely missing the point that one is a business that needs to generate revenue and make a profit. The other is a fun blog without need to do the same. So if one fails over the other, that's not anything close to comparable.

I'm sorry that Jeff Bezos pulled the plug on the Gazette. I'm a long time reader and it was useful.

I bet more folks interact with Dyer's content on various platforms online than read the Gazette in print.

Definitely not saying his is less valuable, I love his blog, just saying it's different. One is a business. The other is a hobby. Dyer makes his money elsewhere presumably, and does this for fun. It doesn't have to support him financially. Not to say that it couldn't. Lots of blogs make money and stay in business I'm actually surprised he doesn't have any ads here to make some money off it. What is his full time job anyway?

The Gazette had so much legacy crap they had to carry. I mean, they really had their own printing presses still in Gaithersburg? I imagine that was a huge weight and thought that would have been out sourced.

And people had to fan out across the county to distribute paper editions to every home (even those they didn't want it). I used to see a minivan go around tossing copies out of the back door.

PAUL is a great addition and is bringing something we don't have on Bethesda Row.

What's new that isn't already there? Not a knock on Paul, just curious about your statement.

Fyer's local blog news and info is indeed great. The negativity comes from his politically loaded posts with opinions he considers facts based on statistics he won't provide sources for. Then he insults anyone with a differing opinion. Add on his goofball music and appearance and it's a recipe for a disastrous public relations issue. As evidenced by the negativity. His blog is great though for all the local info on Bethesda. Love reading here. Having popcorn helps. :)

"Politically loaded posts with opinions he considers facts...insults anyone with a differing opinion...goofball appearance". I thought for a minute there you were talking about the old BethesdaNOW (now Magazine) blogger :)

There's a reason he used public art as his avatar instead of a photo on Twitter you know.

6:14: You can't even spell a name right. The "negativity" comes from you, and as many as 1 or 2 other people posting troll comments. Only trolls have been "insulted," never anyone just for expressing a contrary opinion. Every article on here has been backed up with research and facts.

You think the other reporters covering local news look like Robert Redford? More importantly, do you think anyone cares?

People turn to this blog when they want the facts, the whole story, and not just a press release from the MoCo political machine, and that really hits a raw nerve for you. Hence your "resentment" and negative comments.

2:04 here. 5:56 AM: Written based on observational fact. How does daily hyperlocal news get reported without hyperlocal vigilence? How are on-site, any-hours updates on bomb threats, squalls, pedestrian safety, to name a few, NOT serving the community? (I most appreciate the researched alerts on otherwise underbroadcast, agenda-packed community meetings; but then, I am not okay with schools operating at 180% capacity.)

I recognize the Fyerstarter. The Fyrestarter criticized Robert Dyer's music without listening to it or even knowing what instrument he plays. The album is far from perfect, but Robert's playing is not. He's got a bit of Ritchie Blackmore in his eclectic sound, with some haunting and memorable songs despite that the rest of the band, while giving a good effort, is not on par with his talent. (Yeah... I was watching a Styx concert the same week I first heard "Revenge" and kinda ... well. It was a mindblower to realize that talentwise, had he grown up in L.A. instead, he could have filled big shoes and we'd be listening to him on c.d. rather than reading him in blog. But then who would be offering us a p.o.v. beyond the MOCO machine?)

I hope this is sarcastic. As a recording engineer for a Baltimore studio, it's not great IMHO

8:58: I'd like to hear the critics play my guitar solos from that album, so we can get a sense of just how much better they are than me.

Haha so now you are challenging others to play guitar to prove you are better. So weird.

No one but you seems to be allowed to have an opinion.

I haven't listened to any more than the free clips, but every guitar solo (for example: the solo/intro from Juliette) is sloppy. A ton of mis-hit notes, poor timing, cruddy tone. You overreach on the speed/technicality, and even the slow parts need work on the rhythm. It doesn't matter if your critics are better than you (probably not since I haven't played consistently in years), it matters that they understand music.

Yeah it's not very good.

On related news I tried the PAUL macaroons and they are delicious!! The massive ones are a fantastic treat.