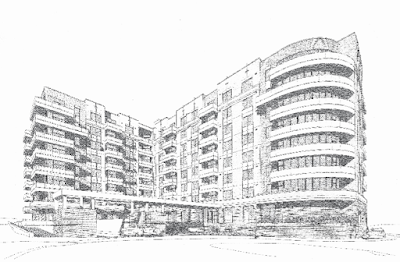 An 8-story apartment building for seniors 55 and older in Bethesda is headed to the Montgomery County Development Review Committee. Located on the property of the Washington Episcopal School at Landy Lane off of River Road, the building will house 121 apartments or condominiums, and stand at 97'. It is being developed by Bethesda-based Sheridan Development.

Sited next to a WES athletic field, senior housing will prevent the project from impacting already-overcrowded schools in the Bethesda-Chevy Chase cluster. It is decidedly urban in character, however. In fact, it is far taller than the heights now being proposed by planners for River Road, which many feel are too high as it is. The only tall buildings in the area are non-compliant with current zoning, and therefore grandfathered in. This building literally looks like something in downtown Bethesda, only there's no Metro station in the Westbard area.

The project also put the cart before the horse, much like the EYA townhomes off Little Falls Parkway.  A zoning change to allow the residential use on the school site was approved back in 2008 by the Planning Board. Both decisions were rushed through by the Planning Board, but only now is the larger Westbard Sector's future being discussed in the sector plan rewrite. Before any comprehensive discussion or decision could be made about what land uses the community would prefer or find appropriate, here are two residential uses randomly plopped down on the map. Their placement will indeed bias future decisions in favor of residential use, which is of course what developers want.

Having said that, the rendering of the building looks better than I expected, and the project obviously will be of financial benefit to the private school.

Rendering courtesy of Sheridan Development
via Montgomery County Planning Department
All rights reserved
Posted by Robert Dyer at 5:30 AM

Is this going to have assisted living or nursing home services? How many parking spaces are being planned for the building?

Convenient for elderly drivers who want to use the CCT.

Just go south on River, then left on at the CCT, then another left on Woodmont, and you're there.

Assuming all this Westbard area development goes ahead what happens to the property value of houses nearby? Goes up because neighborhood is now more walkable? Or goes down because of eyesores towering overhead?

How do you define "more walkable"?
There are paved sidewalks on the major roads right now.

Yeah by "more walkable" I meant higher density so presumably more of a street scene. I agree with Dyer that losing the current retail will not be good but if you get a bunch of decent restaurants in walking distance then I assume property values go up.

Paved sidewalks next to major roads sounds like a sh*tty walking experience to me!