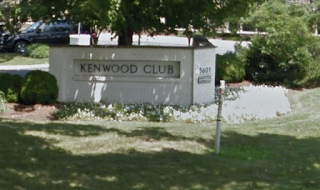 Get ready for the area's best fireworks display on July 2. Not on the Mall downtown, not in Rockville or Gaithersburg. No, it's right here in Bethesda, at the private Kenwood Golf and Country Club on River Road.

Of course, you won't be able to get on the club property July 2 if you aren't a member.

But that doesn't stop residents in nearby homes, or in apartment buildings as far away as downtown Bethesda, from taking in the show from their backyards and balconies. Many have been known to plan Independence Day parties around the display, and pretend that they actually are the Great Gatsby.

What if you're not a resident? The fireworks can be viewed (and heard extremely clearly - you may want earplugs for small children) from nearby church and shopping center parking lots, with the most popular being the church directly across River Road from the club.

Why be a sardine on Metro, and a pickpocket victim in the District (or maybe get your pocket picked by a DC traffic camera), when you can get a better fireworks show right here in Bethesda?

Other clubs may not stack up to the Kenwood display, but here are those with announced dates so far:

Columbia Country Club June 30
Posted by Robert Dyer at 7:00 AM

Is Kenwood as "exclusive" as Dyer's reporting?

Is Dyer a man or a god? A false prophet sent to destroy the fabric of our civilization ... we must fight the demon, we are stronger. WE WILL NOT BOW DOWN.

9:41 AM "Glasshoppa. Before yu can inspire the nudist colony without, yu must first learn to balance the fibers of society within. Have more Metamucil." -Fung Ku, from "STANDING ROOM ONLY"

Metamucil is for wimps. Go with the real stuff - citrate of magnesium.

Will Chevy Chase Country Club have their fireworks display on July 3?

I didn't have a fireworks moment for my salvation. I had a falling in love with Jesus in Sunday school when I was a very young child. See the link below for more info.