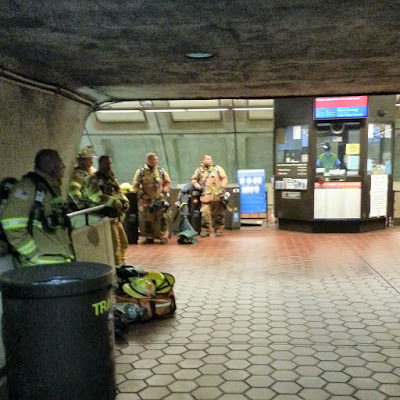 At least one Montgomery County firefighter experienced radio signal difficulties in the Bethesda Metro station early Sunday morning, when county fire and rescue personnel responded to a report of an arcing insulator in a tunnel near the station. The issue was discussed in scanner reports during the incident. After Metro advised MCFRS that WMATA maintenance crews could handle the situation, firefighters immediately conducted a radio test in the area where the radio problems occurred.

Asked via radio by a supervisor where the signal trouble areas were, a firefighter replied, "Top of the escalator, all the way down to the bottom. And then the walk from the bottom of the escalator to the kiosk was intermittent."

The firefighter was asked to ride down the escalator again while using the radio. Scanner communications picked up the following two audible comments during the test:

This is the first radio problem in the Bethesda station I have heard discussed publicly. A MCFRS Battalion Chief, Michael Baltrotsky, reported radio blind spots in the Glenmont and Forest Glen stations on the Red Line in a personnel memo in late January, according to the Washington Post. Metro reportedly fixed another radio problem in the Wheaton station around the same time, NBC4 reported on February 2.

The radio problems have often been blamed on failures of the amplifiers within the underground Metro system, that are supposed to relay the signals.
Posted by Robert Dyer at 5:00 AM