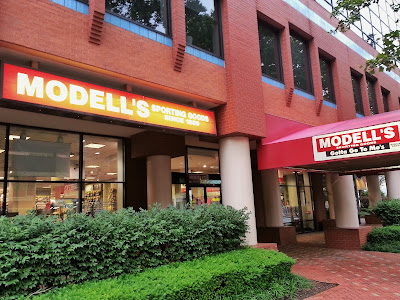 Sporting goods retailer Modell's is growing on Wisconsin Avenue in downtown Bethesda. That means busting through the wall into the space of the frame store that recently closed next door. 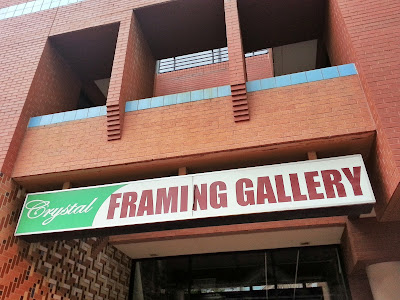 A store employee said the newly-acquired square footage will be used to add a new section of merchandise.

Longtime residents will remember this as Herman's, before that 117-store chain was snapped up by Modell's in 1996 following bankruptcy. Interesting trivia about Herman's: the company actually started as a music store in lower Manhattan in 1916. "Herman" was Herman Steinlauf.

Modell's also started in New York and during my childhood it was a low-end big box discount store that sold everything - pets, clothing, records, etc. I was rewarded for good behavior with a pretzel from the snack bar. The cashiers in each department used special colored staples on your bag and a security guard at the door made sure your bag was still stapled when you left. It went belly up in the early 90s and re-emerged a few years later as just a sporting goods store.

Herman's and Irving's were the go-to Bethesda area sporting goods stores in the 80's. One of them was located in the recently vacated TJ Maxx in Friendship Heights, but I forget which. Lowen's toy store was also awesome. It was on Elm Street for a while and ironically, I believe, used to occupy that same space that is now Modell's.

In addition to the spelling error, the entry for Saturday's hours is also misaligned.

Bring back Lowen's Herman's was never in that location. It was in Friendship Heights below booey monger and in White Flint Plaza.

Yes, in that red brick building where the Jenifer Theater used to be.

Ah, yes. I remember going up the ramps in the old Herman's garage :)

Lowen's toy store. That brings back fond memories of my favorite time in Bethesda history. Fun and interesting shops, like a little suburban Georgetown.

I'm glad Modell's is there and doing well. You really need places like that to have a complete functioning downtown.

Those who don't drive most likely have to go to Footlocker at Mazza for stuff if Modell's wasn't there.

Not to reminisce too much, but Fairmont Ave used to be a bustling place in the evenings when I was younger. There were restaurants like Rio Grande, Foong Lin, Haandi, and Positano all on that block. Then there was a Ben and Jerry's, Erols video, Postal Pizza, Postal Video, and a High's (later 7-Eleven) all nearby.

Now... dead at night, and the new apartment buildings with vacant street-level retail doesn't help. Sad situation from what it was.

1:16 PM Relic was once there as well. Having the backside of the Bainbridge doesn't help. 7770 and the new St. Elmo apartments won't have their entrances on Fairmont either.

The county let Bainbridge and JBG illegally close the sidewalks for long periods of time during construction, so that strangled the Fairmont Ave. businesses.

At least 7770 is filling out their retail space, unlike the Bainbridge.

Things will liven up more once the Greenhill spaces are redone and the empty storefronts are filled.

Herman's? I think longtime residents will remember that location as home to Lowen's, the best toy store I've ever seen in the county. Too bad it went under many years back. Does anyone have any photos of it?

As stated above, Lowen's briefly relocated in the early 1980s to Elm St to what I think was a former car dealership, before returning to its original location on Wisconsin after that building was rebuilt.

In the end Lowen's tried to become an upscale shop like FAO Schwarz, but likely was done in by price competition from Toys R Us.

They should turn that jam back into a soft-serve shop. Gotta go to Mo's!

Steve, you're right. I shopped at both locations of Lowen's. It was in the former Bethesda Ford showroom on Elm Street. I imagine the rents and cost of doing business in the county accelerated dramatically after the redevelopment of downtown Bethesda began being a factor, too, in their demise. Because I used to buy toys at both Lowen's and Toys R Us, so theoretically they weren't losing my business to TRU - partially because each sold items the other didn't.

Have you found any photos of Lowen's shop anywhere? I haven't been able to dig up anything online.

Would be great to see some old photos of Lowens... and wasn't Chesapeake Bay Seafood House nearby also?