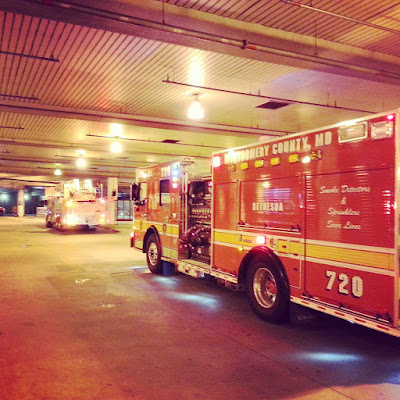 Montgomery County Fire and Rescue personnel have responded to a report of smoke in the Metro subway tunnel between Friendship Heights and Bethesda. Operations are now centered on the Bethesda station, as firefighters try to work with Metro personnel to investigate.

One firefighter on scanner broadcasts said that Montgomery County personnel are receiving "conflicting reports from Metro" regarding the location or source of the smoke. Around 1:45 AM, he said Metro had sent a train down Track 1, and had confirmed "they have an arcing insulator at...Norwood."

Fire personnel appeared to be taking a careful approach to the situation. Firefighter 1 said they were responding as a "good intent only" call. He advised personnel to "open up the shaft," but warned them, "you are not to [garbled] into the shaft."

Firefighter 1 reported minutes later that Metro had a maintenance crew on the way. "We're in a holding pattern," he said.

Metro was already single-tracking between Grosvenor and Bethesda at the time of the incident. Metro personnel told firefighters the reason for that was maintenance work, according to scanner reports.

After a delay, Firefighter 1 explained, "the holdup is, a track walker is walking to the event."
Posted by Robert Dyer at 11:07 PM