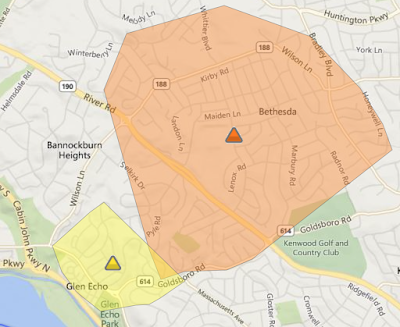 Two significant power outages have customers in the dark tonight in Bethesda and Glen Echo. The largest involves 2355 Pepco customers in an area roughly around Wilson Lane, River Road and Goldsboro Road. But the outage seems to follow Goldsboro, and a second dark spot is in the Glen Echo area where that road meets MacArthur Boulevard. That outage also extends west to the Wilson Lane area south of River Road.

The gas station and other properties at Goldsboro and MacArthur are all pitch black, as are homes on the west side of Goldsboro. Glen Echo Park still has power, but the traffic signals at Goldsboro and Massachusetts Avenue are out. A truck crew was using their own lighting to try to load deliveries into a business at the retail center when I passed by.

Pepco is estimating a 1:00 AM restoration for Glen Echo and the lower Goldsboro vicinity, but 3:00 AM for the larger outage near Walt Whitman High School.
Posted by Robert Dyer at 8:44 PM

I live in that area, near Wilson Lane, and we've had no outages at all tonight.

9:16: The outage map doesn't have the precision to show which streets are without power, only general areas. For example, the map shows the outage covering part of Glen Echo Park, but the sign was lit up when I passed. I can assure you the power was most definitely off in other parts of the area shown on the map as I saw it firsthand.