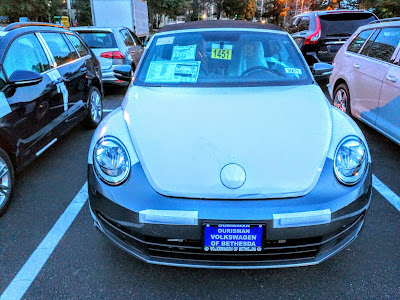 Downtown, urban car dealerships do have their logistical challenges. Witness the influx of Volkswagens and Volvos to the far end section of the parking lot at Westwood Shopping Center in Bethesda. They are from Ourisman Volkswagen and Volvo, a new dealership located in the ground floor of a luxury apartment building on Arlington Road.

That dealership is primarily centered around its small, street level showroom. While some cars were seen in the building garage there, these appeared a little over a mile away on Westbard Avenue a few days ago. They're taking up a few rows of the freshly-repainted parking lot, which has previously hosted the film crew of National Treasure 2, and served as a staging area for the Barack Obama campaign on Election Day. Although the main parking area is crowded during business hours, this end portion is rarely used beyond as a truck turnaround or as overflow parking for Westland ES or Bowlmor.

For all the criticism of surface parking lots, they apparently remain a necessity. 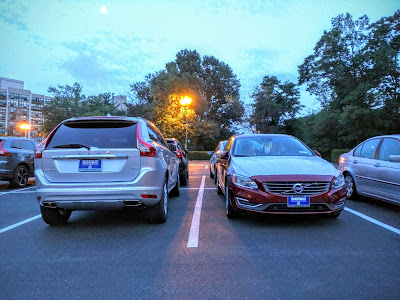 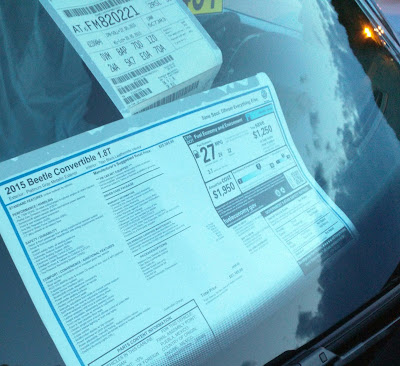 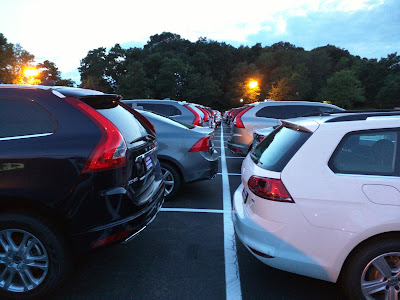 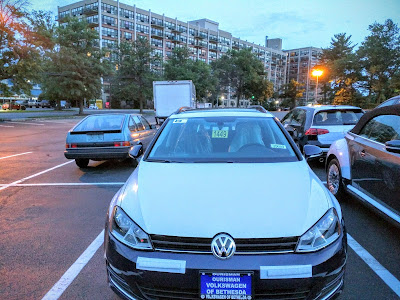 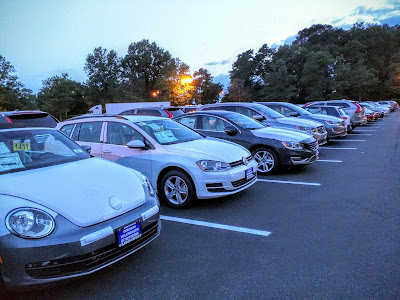 You said "in Bethesda", but this is Westbard.

I wouldn't call storage for a bunch of unsold cars a "necessity". It's a use for an otherwise unused space, but that's about it.

Nothing a grassy field could not also do.

Funny thing is that no one who lives in that area now or grew up there ever said "I live in Westbard".

Westbard is just a street through there.

What a meaningless piece of reporting.

What it actually shows is how poorly scaled is that parking lot to the shopping center.

Maybe someone can set up an RV park there.

So there is too much parking space that there is no demand for - so they lease it for new car storage.

Wow, way to entirely prove the parking spaces aren't at all a "necessity."

If an abandoned, decrepit house is full of junkie squatters it is still a home to someone.

....and another example of the failed Dyer meme of "moribund MoCo economy"....

Peter, no major corporation has moved here in over a decade, our share of the region's jobs is plummeting, and we have vacant office space near and far from Metro stations.

The MoCo economy is indeed moribund.

8:15: I know it's a MS, I grew up in the neighborhood and played soccer on the field there. It's just a typo.

7:04: You must be new to the area. Westbard Avenue is in Bethesda.

7:09: It clearly is a necessity, or else these cars wouldn't be so far from their dealership.

7:59: That part of the lot has never really been used for the shopping center. It is a separate plot zoned residential up until now. I believe it was used by workers when Park Bethesda was a federal government building.

8:49: Either of the previous developers could have put a new wing of retail on that separate parking area years ago by asking for a zoning change.

If you're trying to argue that there's no demand for parking in the huge lot between Rite Aid and the houses on Ridgefield Road, you obviously haven't been there during business hours.

But there's no reason it needs to be a *surface* lot, right? Clearly, there's demand for parking spots, but those VWs and Volvos could just as easily be parked underground somewhere. And, incidentally, the other thing that part of the Westbard lot is used for is overflow church parking on Sunday morning.

I'm with the trolls on this one. Even the dealers on Rockville Pike store their cars in an empty parking lot a mile or two down the road. There is definitely no shortage of parking on Rockville Pike. These dealers just seem to have a ton of inventory.

This is indeed an unusual angle on this story. With all of the demand for housing, parking, sidewalks, and bike lanes in Bethesda, it seems very odd to me that we have so many car dealerships with hundreds of cars worth of inventory.

Wouldn't many of Bethesda's problems be solved by replacing car dealership with other retailer who don't need so much physical space?

Oh so you agree with pro development zoning changes now?

It seems the point is mistaken in a short sighted way. If parking was in demand, then the parking would be used for something other than storage.

Robert: you make this mistake often. You make a couple casual observations (surface lot is used by a car dealership miles away) and then draw all sorts of conclusions without understanding the industry you're making assumptions about. Case in point: Car dealerships are far more likely to sell a car if they can promise the buyer that it'll be here the same day (i.e., people want instant gratification). So if there's parking available for the right price within miles of a dealership, that dealership WILL pick up inventory-- which they can swap with neighboring dealers in the entire metro area-- because it improves their number in the long term. The fact that a parking lot is being used by a car dealership miles away is an indication that it's unused, cheap, available STORAGE. Completely the opposite of what you're trying to argue here.

I also side with trolls. Robert likes cars, highways, parking, and an imaginary bridge across the Potomac. He supports his opinions poorly and with his imagination.

Quite the contrary, Dyer continues to be proven correct. The office space report is just one recent example.

2:53: I don't think anyone ever opposed adding more retail to the site.

Despite attempts by trolls to confuse the in-demand large parking lot at Westwood Shopping Center with this end section that has been underutilized for decades - the fact is that dealerships and others need this space. If they had capacity on-site, they wouldn't waste money moving inventory to off-site parking lots.

So when all surface lots have been turned into luxury apartment buildings under The Planning Department's current ideology, where will car dealers put their inventory?

In other words, if the dealer is "far more likely to sell a car" with the aid of surface parking availability, will they benefit financially with the elimination of that parking?

4:09: The 25% of traffic on the Legion Bridge that is traveling to or from Dulles is hardly imaginary - it's in the MWCOG report.

But you and the MoCo Machine's traffic congestion record speaks for itself - #1 worst congestion in America year after year.

I noticed the dealership's cars at Westbard also, but drew the opposite conclusion -- there is too much surface parking in that shopping center if the spaces are being used as long-term car storage.

Of course the reason the dealer is doing it is that it's cheap. That dealer DOES have another storage facility, located behind the McDonald's on River Road (kind of beside the Cap Crescent Trail). They have a funky multi-level car storage thing kind of like an elevator, with stacks of VWs there. I'm sure that cost them more than putting cars on Westbard.

I don't understand why Westbard doesn't put retail in that parking lot -- is it a zoning issue? When they redid the mall on Sangamore Road some years ago, they put a CVS and some other businesses where it used to be an empty parking lot. Good re-use of that space.

Cheap storage being the keyword. Why would it be cheap? Because there is capacity. Supply and demand.

It seems Robert's post is well intentioned but perhaps a bit misguided - and those who have issue with Dyer in general take it as an opportunity to nitpick on him - and Dyer takes the bait and turns into an ugly mess.

Yes, surface parking lots are still in demand. However, it seems in this case it's not so much a demand by retail users, so since there is so much extra space that is unused, the dealership is able to appropriate it for convenient local storage. So yes, the demand is there, just not from car drivers themselves.

8:23: The parking lot beyond the service drive along Rite Aid has been zoned residential, but the previous 2 landowners could have filed for a zoning change to build more retail. Both were focused on the bigger potential profits of mixed-use urban redevelopment of the entire site. Equity One is the third owner more recently.

So there's nothing that has completely prevented retail from being added there. Any other retail center in America would have dropped a couple of restaurant pad sites over there 30 years ago, let the existing structure operate while building the new one higher up in the lot, and demolished the old one after the tenants had moved into the new one. And then probably put up additional retail where the original structure stood. It's not exactly rocket science, unless you're stalling out for an urban-style mixed-use plan.

I agree that the Shops at Sumner Place was a good example of what could be done at a non-transit oriented site.

8:52: The demand I referred to in this case is from the local businesses - auto dealerships. And previously from movie studios and the Obama campaign. In short, there remains a demand for the uses that can only be met by surface parking.

Raise your hand if you're a MoCo resident who has to use Dulles for business travel. A lot of hands are going up. We deserve better access to Dulles.

8:48: Just to be clear, that section of the lot was meant to be developed. It is rarely used for parking by retail customers. It stands separate at the other end of the property. Its availability in no way can be used to claim that there is a lack of demand for parking in the main parking lot at Westwood Shopping Center.

9:04: Yes, BWI and Reagan National simply don't offer the range and frequency of flights to the new business capitals in Asia and the Middle East that one can access at Dulles. This is a major reason MoCo's economy is stalled.

Hopefully they are unloading vehicles there and then bringing them over as necessary to downtown Bethesda. Trying to get around the car delivery trucks on Arlington and around Bethesda row is extremely frustrating

Can they ticket those unloading trucks please!

What if there is a hail storm?

You have shared a great information about Winter Car Storage southampton,Car storage Southampton.Which are very informative for us.Thanks