A full two-thirds of the speakers at this afternoon's public hearing on the Bethesda Downtown sector plan will be representing developers. Taking into account the 7:00-9:00 PM hearing, developers will account for 50% of the total speaking slots.

Found yourself shut out of the opportunity to speak at the hearings, and told to submit written testimony instead? You may understand why after studying the speakers lists.

Of course, I am not suggesting landowners and developers shouldn't have their say. To the contrary, they have the right for their interest to be heard. The decisions made by the Montgomery County Planning Board will have direct implications for their property values and redevelopment rights.

But should developers and citizens have to share an arbitrarily limited number of speaking slots? Development attorney Bob Dalrymple, for example, will speak for 27 straight minutes during this afternoon's 2:00-5:00 PM hearing, occupying 9 consecutive speaking slots.

The hearings will be held at the Bethesda-Chevy Chase Services Center in downtown Bethesda. 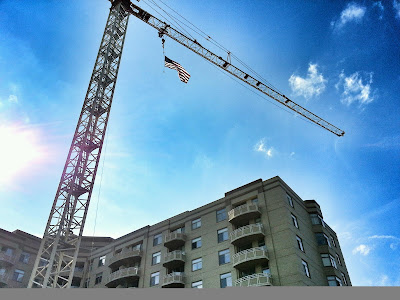 And they are paid for their time, whereas citizens and community reps are not.

Can't the attorneys just submit written testimony rather than taking all of the speaking slots?

Same could be said for residents. What a waste of everyone's time and resources and money.

It's a bit absurd for an attorney to filibuster like this.

How is this a filibuster again?

They need time to tell us about their attention getting waterfalls and murals.

What's the logic behind giving one person multiple speaking slots?

Thanks for reporting this -- no other news outlets seem to focus on important details like this.

What an idiotic process. What a waste of time. This could all be submitted electronically for review.

Very interesting post, Bob, thank you. Just read his testimony calling Bethesda a "major urban city." Too bad residents didn't get that memo. I guess we were suckers to think we were buying into a "vibrant downtown" with good schools. The existing residents' voices are being completely drowned out by developers. You should listen to last week's testimony, when a woman brought up her concerns about children and the accidents and fatalities near Bethesda Elementary due to the over development. Nah, just urban core. Let's add more density to that "district."