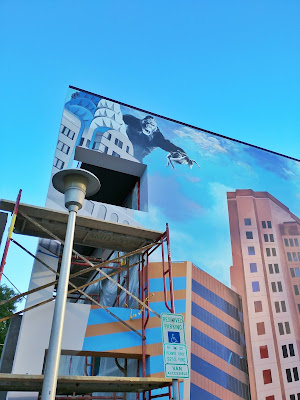 Watch out for a giant simian clutching a woman high above Cordell Avenue in downtown Bethesda. It's the infamous King Kong, who was revealed to the unsuspecting public when most of the scaffolding was removed in front of the new mural on the future restaurant space at 4848 Cordell Avenue.

Work continues on the interior, and a Greenhill Capital plaque has been installed outside.

The public art mural of New York City was inspired by the New York New York Casino & Hotel in Las Vegas, and is part of the redevelopment of this Greenhill property. A former homeless shelter, it is now planned for a currently-unnamed restaurant tenant. The renovations were designed by the architecture firm of Steven J. Karr, AIA, Inc., and the contractor for the project is Sigal Construction. 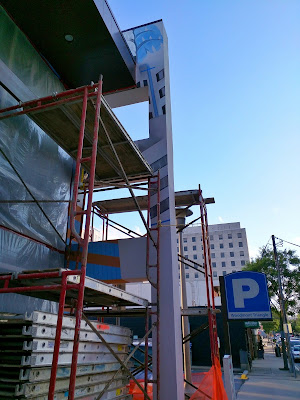 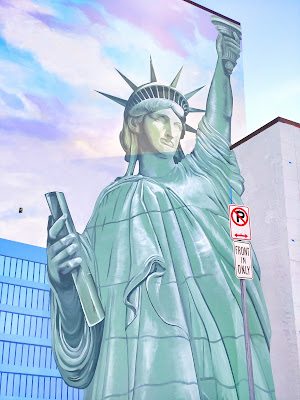 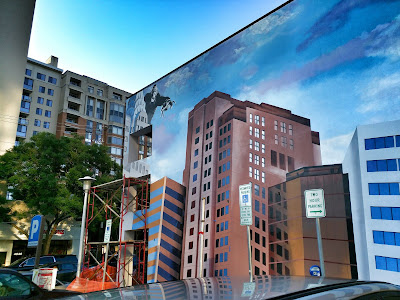 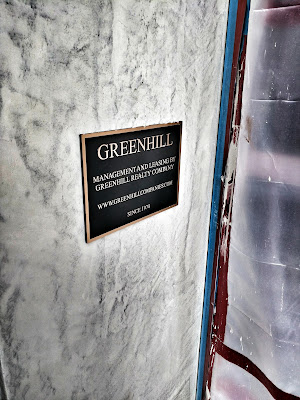 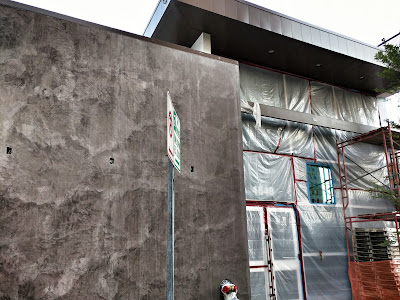 The plaque that says "Greenhill" is missing the word "Lease"

So who is this new mystery tenant?

I was talking to the artists and they say they have no idea why it's a NY theme. One of their answers was priceless - "good question!?!" As he was just as flabbergasted by the NY theme.

Anonymous said...
This comment has been removed by a blog administrator.
8:47 AM

Why does Lady Liberty have a no-parking sign in her armpit?

Mr. Greenhill bring down this wall.

Doesn't seem Mr. Greenhill is of mind to do anything beneficial to his communities.

Just out of curiosity and in the interest of disclosure, does Robert Dyer know Lenny Greenberg personally?

I really hope Greenhill has a nice big plan for all this property he is buying and that the plan is a good one and soon.

This new building isn't much of an improvement on the old one. What a waste of prime real estate and does nothing to improve woodmont triangle. What a shame.

King Kong climbed the Empire State Building, not the Chrysler Building! This is a horrible misrepresentation of historical events!

12:55pm you lost credibility with that statement. You're claiming the old homeless shelter was a better building?

Apparently there was some kind of music club/bar called "King Kong's" in Bethesda in the 80s, but I have no idea where it was located.

Ha. Nice analysis of my statement. Surely it's a prettier building, but doesn't do much to improve usability. Hence not much of an improvement.

To be fair the old building did provide community services whereas this one will be vacant if you follow Greenhill trends. Or actually it will rent out to a restaurant and the restaurant will owe a large sum to Greenhill and then get evicted and then it will be vacant. I'm jus saying. :)

Forget about bringing down this wall (um, notice how it's part of the building). Bring down the wall cutting the Fairmont street scape before Bainbridge. So stupid.

The new design certainly enhances usability.
The shelter space couldn't reopen as a restaurant. At best, it could have been a dental office or something of that nature.

A restaurant that will go under in one month and it'll be vacant again.

Sure it's better. But could be so much more.

new tenant will be taking over the spot in approx 45 days, as I stated before its mural goes with the theme of the Establishment. it's going to turn this side of Bethesda around quick. stayed tuned. presser coming soon.

Oh cool. A bit much to think a single tiny establishment will "turn this side of Bethesda around quick", particularly given Greenhill property history, but here's hoping it does just that! :)

How come Dyer never uses the word "moribund" to describe all those vacant Greenhill properties?

particularly given Greenhill property history ? I don't understand why people think greenhill are such bad people. the moto is u pay stay. look at blacks, they did not pay and they were out.

Dyer never says anything bad about Greenhill. In fact, he deleted a mildly critical comment immediately above.

Can you prove it and provide your sponsor list?

does the statue of liberty have the torch in the wrong hand ?

If you are planning to organize a conference on a grand scale and want to create a good impression in front of all the clients and guests. Then it would be very useful to take services from corporate event planning experts and organizers.