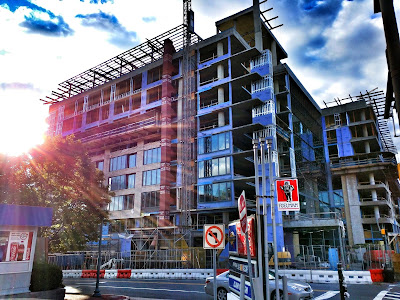 Parts of the Flats at 8300 luxury apartment project at 8300 Wisconsin Avenue are actually starting to resemble their finished forms. Large sections of glass installed, the rooftop deck beginning to take shape, and the bumpout for the lobby entrance are just some of the details that give a more solid impression of what the finished structure will look like.

New signage boasting renderings of the future building are touting the apartments, as well as the much-anticipated Harris Teeter grocery store. They're also highlighting a new aspect - the Starbucks inside the Harris Teeter.

Flats at 8300 is being constructed by The Donohoe Companies for developer StonebridgeCarras. Longtime Bethesda residents will remember this as the former site of a Ramada Inn hotel. The project also includes townhomes on the Wisconsin Avenue side, and will be managed by Bozzuto. 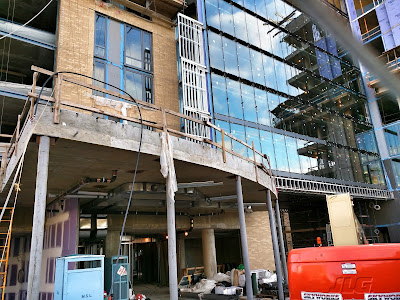 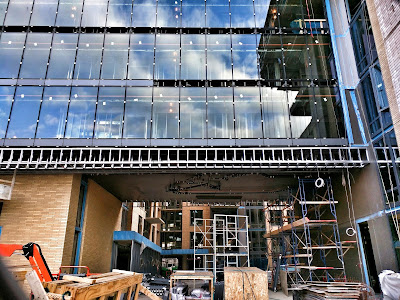 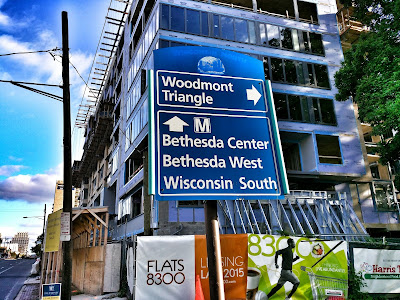 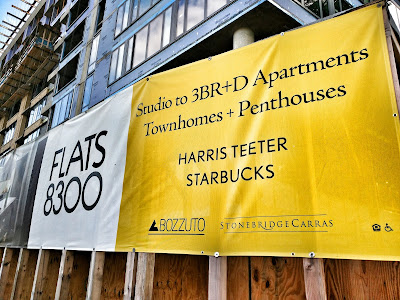 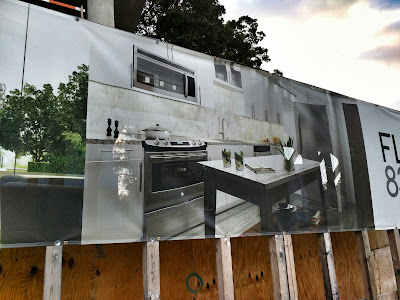 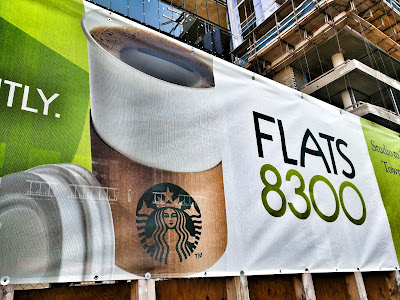 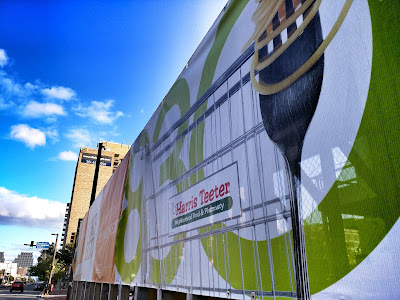 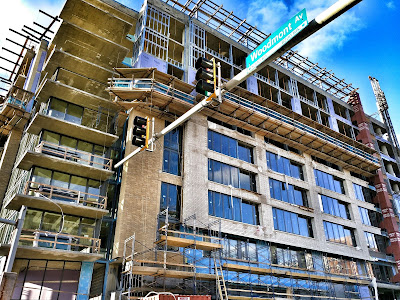 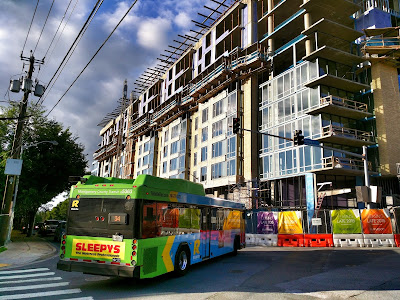 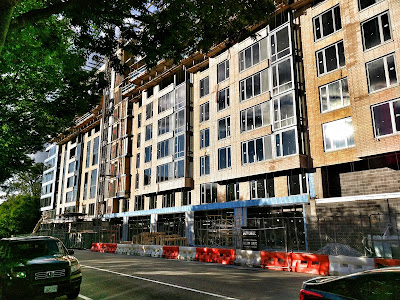 I don't get where the town homes on the Wisconsin will go. Looking at it there's no spot? And why townhouse against a highway? I know the other side has them.

So every other new apartment building will be called The Flats?

Odd considering that the term is somewhat down-market in England.

"Anonymous said...
So every other new apartment building will be called The Flats?

Bethesda is turning Londonese. Well, I really think so.

My G-d, their homepage is annoying. I hate "spash pages" with a passion.

I can't find any mention of "townhomes" on their website, and I certainly haven't seen anything that looks like one on the Wisconsin Avenue side. Dyer is confused, as usual.

11:49: It says "apartments, townhomes and penthouses" right on the website and the yellow sign pictured above. I've never seen a rendering of the townhomes, but there sure as heck isn't any room for them on the Woodmont or Battery sides. It sounds like *you* "are confused, as usual."

"there sure as heck isn't any room for them on the Woodmont or Battery sides. It sounds like *you* "are confused, as usual."

Did you bother to look at the Wisconsin Avenue side, to see if there is room for them? Moron.

The townhomes will be along Wisconsin Ave. What makes them townhomes is that there will be a front stoop and entrances right off the street, they will not be a separate structure from the apartment building. Take two minutes to google 8300 Wisconsin and read the project description from the architect.

Also the developers brand for apartments is the Flats so apartment projects built by that developer will be called the Flats, another answer easily found with Google.

Why is Dyer always arguing with his readers? This never happens at the "glossy magazine". They always positively engage with their readers.

So not so much town homes, just private entry apartments or some such hybrid. Why along Wisconsin vs the much smaller woodmont?

Any other apartment or condo would call these "first-floor units with outside entrances". How utterly pretentious.

What is 5:12am babbling about now? Translate for the rest of us.

5:12: That's not a reader, it's a troll. Readers don't lie, and then call someone a moron right off the bat.

It doesn't take much reading to realize that you are a moron.

That's not true, the Whitney above Bethesda Blues and Jazz calls their street entrance units facing the neighborhood townhouses as well. Both are story units with a street entrances.

At least the townhouses at Whitehall on Battery Lane are real townhouses.

Townhouse-style apartments perhaps migh be more accurate. But hey, marketing folks sure like their fancy spin. "Flats" being a perfect example.

Actually it's a pretty fair question. Why bother engaging (the good and bad) if you are going to sink to the level of those "trolls" you speak of? Rise above it and the trolls will stop feeling the need to troll you. Which obviously they feel appropriate to do so now with the way you respond.

Be the better man and the argument recenters on the topic of conversation and not the man behind it.

7:24: I'm the one who had it right, you said I was wrong, and you're saying I'm the moron? Not very credible logic.