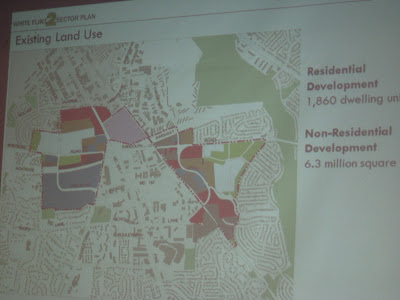 Residents, activists and landowners gathered at Luxmanor Elementary School last night for the launch of the White Flint 2 sector plan process. The plan will determine much of the redevelopment future of properties located roughly between Twinbrook Parkway and Montrose Parkway. Now that Montgomery County has established the Pike District will be a high-density growth area, and Rockville is preparing its own higher-density plan for Rockville Pike north of White Flint 2, this area is also primed for a taller and denser future.

So while the larger question over urban vs. suburban density appears to be moot, residents remain concerned about the impacts on schools and transportation. Green space is a priority for current residents, as well.
Those concerned about overcrowding said the community "needs schools, not a plan for schools," as one attendee wrote on the Feedback Wall after the presentation. Specifying a site for a future school in the Walter Johnson cluster was also cited as important by some. How to pay for the schools was another question. One resident asked a member of the planning staff if the plan could require developers to build a new school. That is not the current policy in Montgomery County, however, where developers today pay a fee to cover what the projected impact of their project will be on the school cluster in question. But that arrangement has failed to produce enough revenue to cover the current school construction needs in the county.

Redistricting also looms large in the minds of current and future public school parents. Will only the new children be districted outside of the Walter Johnson cluster? Many attendees felt that cluster was already too crowded to handle any additional capacity.

Alternatively, one commenter echoed a talking point being promoted by some county officials, saying planners need to "determine what future parents consider an acceptable school design, especially millennials. Do they continue to expect stand-alone buildings, or are there other alternatives?" This likely refers to the suggestion by those officials, and an architect hired by a developer, that the school of the future might be small in footprint, urban in design, could be in a building with other uses, and be located in an industrial area. That's going to be a hard sell for most parents, I expect.

The one comment that summed sentiments up best was, "Show me the school!!!"
Many expressed wishes that the two sections of the Pike District be cohesive and well connected for pedestrian and bike traffic. Among the ideas for transportation were shuttles between the new residential developments and commercial centers, an additional entrance to the White Flint Metro station at Old Georgetown Road, and smaller blocks to improve walking conditions. However, some said intersections were so bad as it is that there would have to be a plan to deal with the additional cars that would be added to the area.

Parks were on the minds of many. One future park site suggested was the current Park and Ride lot. Overall, people said they wanted sizable parks, not pocket parks. "No one wants to live in Cement City," one commenter wrote. "Would like to be able to walk to a park, rest, relax, and play with my dog," wrote another, who noted that Cabin John Park was the closest significant park right now.
Posted by Robert Dyer at 5:00 AM

That park and ride at 355 and Montrose is never even close to full. What a waste! The most use it gets is from people who live at the Monterrey and other buildings west of 355 traversing it to get to the metro. Worst of all, they (SHA) couldn't be bothered to put a sidewalk in to connect to 355, so all those people have to walk across the dirt. typical.

Robert, Thank you for your detailed coverage of community meetings. I don't see many people commenting on your posts, but I always read them with great interest. In the absence of the Gazette, your reporting on local events is more important than ever. Thank you so much for your dedication to attending local meetings and sharing your detailed observations with others.

So they're not even going to build real schools anymore? Just rent office space somewhere?

This is a new low for the county. Anyone supporting such an idea should be voted out immediately.

Can we have more posts here please? This is so interesting......

I bet that the one person who mentioned the millenials was there at the request of county planners or our county council. Those future residents are not yet constituents and do not vote and do not pay taxes. Let's remember that when we go to the polls next time. There are several County Council members I would like to replace.

It is interesting that all those PTAs that are now so vocal helped re-elect Roger Berliner, the number 1 supporter of the developers. Perhaps we can ask those PTAs from B-CC HS, Chevy Chase ES and Westbrook ES that over the years appeared on Roger's election flyers, to explain what he is doing for us now.